Give Me Liberty Or Give Me Death!

What is the Citizen's Rule Book? | The 10 Commandments Verses Communism

Rights Come From God!
"Where the spirit of the Lord is, there is Liberty." —2nd Corinthians 3:17

SEC. II GIVE ME LIBERTY OR GIVE ME DEATH!

Young Christian attorney Patrick Henry saw why a JURY of PEERS is so vital to FREEDOM! It was March 1775 when he rode into the small town of Culpeper, Va. he was totally shocked by what he saw! There, in the middle of the town square was a minister tied to a whipping post, his back laid bare and bloody with the bones of his ribs showing. He had been scourged like JESUS, with whips laced with metal.

Patrick Henry is quoted as saying: "When they stopped beating him, I could see the bones of his rib cage. I turned to someone and asked what the man had done to deserve a beating such as this."

SCOURGED FOR NOT TAKING A LICENSE!

Three days later they scourged him to death.

This was the incident which sparked Christian attorney Patrick Henry to write the famous words which later would become the rallying cry of the Revolution. "What is it that gentlemen wish? What would they have? Is life so dear, or peace so sweet, as to be purchased at the price of chains and slavery? Forbid it, Almighty God! I know not what course others may take, but as for me, GIVE ME LIBERTY OR GIVE ME DEATH!" Later he made this part of his famous speech at St. John's Episcopal Church in Williamsburg, Va.

Excerpts From The Citizens Rule Book

Note from webmaster of Jesus-is-Savior.com...

Wake up everybody! Why are the churches silent? I keep hearing Christians saying foolish things like "Satan must run his course," others just burying their head in the sand. What is it going to take to wake people up, a militarized Police State where preachers will be imprisoned for propagating hate speech, for preaching the Bible against homosexuality and sin? What will it take, naked body scanners? Are you just going to hand over your firearms to the government, a violation of your 2nd Amendment Bill of Rights? Already, Anti-hate speech legislation has been passed in Canada and is now before congress here in America. Folks, freedom isn't free. And by the way, Democracy is NOT Freedom. You need to believe some of the things you hear.

“If we stuck to the Constitution as written, we would have: no federal meddling in our schools; no Federal Reserve; no U. S. membership in the U.N.; no gun control; and no foreign aid. We would have no welfare for big corporations, or the "poor"; No American troops in 100 foreign countries; no NAFTA, GATT, or "fast-track"; no arrogant federal judges usurping states rights; no attacks on private property; and no income tax. We can get rid of most of the cabinet departments, most of the agencies, and most of the budget. The government would be small, frugal, and limited.”

Police State USA | Evils in Government | Is Your Car Spying On You? 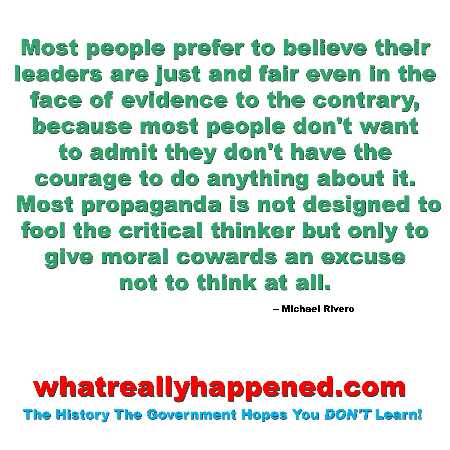 “Evil triumphs when good men do nothing” —Thomas Jefferson

The Gospel (Jesus died on the cross for our sins, was buried & resurrected)
(Salvation is by God's Grace Through Faith in Christ's Payment on The Cross for Our Sins Plus Nothing! Salvation is not doing your best, it is having Christ's best put to your account through receiving Him by faith!)