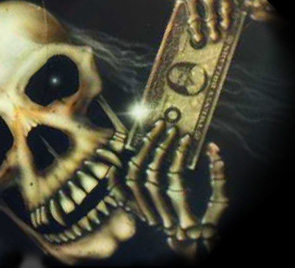 In the 1970's it was the HEE HAW WHORES, with featured guest Hugh Hefner, having Roy Clark sing What a friend We Have In Jesus At the End. What a bunch of masqueraders, phonies, and hypocrites!!! The show featured big breasted bimbos laying prostrate, while dirty-old-men told filthy jokes, and then Buck Owens ended it all by singing Power in the Blood.

Today, decades later, it's a hundred times even worse with trash like Carrie Underwood! Carrie Underwood is the Katy Perry of Country Music. Country Music Television (CMT) is straight from Hell. The videos being produced today featuring Country Music are saturated with sexual-suggestiveness and lesbianism, inspiring a nation of adulterers to commit more wickedness. Adulterous industry executives produce adulterous music videos which inspired adulterous viewers. Greed is their motive. Sex sells, and the entertainment industry are selling a lot of it to the public. Judgment day is soon coming (Hebrews 9:27; Colossians 3:5-6; Romans 1:32; Matthew 12:36; Ecclesiastes 12:14).

God vomits over that kind of lukewarm garbage (Revelation 3:15-16). That's not Christianity in the least! Not in the least!!! God hates when women dress immodestly, wearing tight blouses, halter-tops, and Daisy-Duke shorts. That is evil in the sight of God. It promotes fornication, adultery, and sexual sins; which Jesus condemned as adultery in Matthew 5:28.

Most men think it's health and normal to lust, look at porno, and commit sexual sins. It may be normal for the carnal, heathen, backslidden, and unsaved man; but it is NOT normal nor acceptable with God. Colossians 3:5-6, “Mortify therefore your members which are upon the earth; fornication, uncleanness, inordinate affection, evil concupiscence, and covetousness, which is idolatry: For which things' sake the wrath of God cometh on the children of disobedience.” Did you read that? Sexual sins are evil in the sight of God! But people don't take God seriously, thinking it doesn't really matter, and what's the big deal anyway; the horrifying consequence has been the brutal merciless murder of over 51,000,000 children in the United States since 1973 Roe Vs. Wade. MURDERERS!!!

Jesus condemned sexual lust in Matthew 5:28, “But I say unto you, That whosoever looketh on a woman to lust after her hath committed adultery with her already in his heart.” The Word of God pronounces judgment upon whores and whoremongers... “Marriage is honourable in all, and the bed undefiled: but whoremongers and adulterers God will judge.” Yet, fans of country music see nothing wrong with dirty sensual line dancing, where people are shaking their butts and flopping their body parts all over the place. It is unholy, sinful and rebellion against God Almighty!!!

Acts 2:40, “...Save yourselves from this untoward generation.” The word “untoward” in Acts 2:40 means “perverse, crooked,” and that is exactly what America has become today. The Bible says, SAVE YOURSELF FROM THIS PERVERTED GENERATION. And then the next verse in Acts 2:41 tells us that 3,000 souls were saved that day and added to the Church. The answer is not rehabilitation, nor education, nor reformation, nor legislation but rather, REGENERATION by the Gospel power of Jesus Christ (Romans 1:16). Ye must be born again (John 3:5). That is the hope of America!

Nearly everyone whom I speak with has a “form of godliness” (i.e., religion, 2nd Timothy 3:5), but they are as lost as the Devil and have never been born-again. It is almost impossible to deliver them from the errs of their thinking, because they do not believe IN THEIR HEART that the Bible is God's Word. Satan blinds the MIND (2nd Corinthians 4:4); but salvation is of the HEART (Romans 10:10). They do not believe. They have numerous satanic strongholds in their mind. Until a person acknowledges God in their heart as Romans 1:21 says, then they will never get saved. Most people do not want to retain God in their thinking as Romans 1:28 teaches. They are religious, but lost; and you cannot talk any sense to them because their hearts are hardened in unbelief.

Carrie Underwood needs Jesus to help her put some clothes back on!

Brad Paisley Wants to Check You for Ticks

Commercialized Country music and sexual immorality are inseparable. The industry is corrupt. It's been that way for decades. Country music is known for its adulterous, distasteful, and retarded lyrics. Take for example Brad Paisley's song, Ticks, which contain the stupid lyrics... “I’d like to walk you through a field of wild flowers, and I’d like to check you for ticks.” What kind of weirdo would write a song like this? Ticks? That's just sick.

1st Timothy 2:9 plainly commands every Christian woman to dress modestly... “In like manner also, that women adorn themselves in modest apparel, with shamefacedness and sobriety...” It is a sin for women to wear tight revealing pants and other forms of immodest clothing in public. The same women today who laugh and scoff at my preaching against women wearing pants, are the ones out fornicating and having abortions, divorcing and becoming lesbians because they can't find a perfect man that can live up to their retarded feminist standards. Feminism Has Women Freezing Eggs (endlessly searching for the non-existent Mr. Right).

The lyrics to Country music are nothing less than retarded and disgraceful these days. And sadly, people can't seem to get enough of the garbage, they want more. As long as people are lining up to buy garbage, the garbage trucks will keep rolling in with new trash to unload on the public. Americans get what we deserve.

The Demonic Influence of Sexually Oriented CMT  And GAC Videos

Country Music Television (CMT) leads the way in smut, filth and sexual lasciviousness. One can only wonder how many sexual sins have been committed by people who were demonically influenced by CMT's filthy music videos.  It is no trifle matter to the God of the Bible. Deceitfully, today's lewdest country artists portray themselves as being pro-family. In reality, little girls are undoubtedly being molested by drunken fathers who watched some whore gyrating all over TV, in some sexually lascivious country music video. Lasciviousness means unhealthy sexual desire.

Rodney Atkins promotes sexual immorality and boozing. Sadly, bums Jimmy Buffet and Toby Keith glorify the sin of drunkenness in their shameful 2013 video, “TOO DRUNK TO KARAOKE.” Only God knows how many you people will go out and get drunk while acting crazy from hearing garbage music like that, making drunkenness a fun party thing to do!!! God condemns drunkenness for the horrible sin that it is! Shame on Toby Keith and Jimmy Buffet. Anything for money!!! Judgment day is coming. The Bible teaches that God is going to hold every person accountable for their works, whether they be good or evil (Ecclesiastes 5:8; Hebrews 4:13; 10:31).

One of the most filthy, risqué, shameful and lewd videos produced in 2013 was the garbage video by Kellie Pickler, “Someone Somewhere Tonight.” It's not just Pickler, Carrie Underwood is a Godless woman, a disgrace to America. The most sickening thing on GAC (Great American Country) was hearing the women and talking about the favorite Gospel songs and then they played Pickler's sensual trash. It is offensive to any decent person who loves God!!! We seem to have a sick form of thinking in America that the Lord Jesus Christ accepts our abortion, same-sex marriage, nudity, taking the Lord's name in vain, drunkenness, idolatry and public lewdness in female music videos. God HATES all of those evils! God hates sexually suggestive anything unless it's between a man and a women in the privacy of her bedroom.

Throughout the video “Someone Somewhere Tonight” Kellie Pickler is bending over, her boyfriend is pressing up against her on the wall, she's laying on the floor, he's positioning her in every sexual position that only a husband and wife should share in a marriage bed. In one scene he laying on top of Kellie and her mouth is opening as if she's being made love to. They're having sex with some of their clothes on, that's what it is! I heard Pickler say on the Grand Old Oprah that her husband recorded that video, as if it makes it any better. The video promotes lasciviousness!!! What kind of creepy husband would video tape his wife being fondled, ogled and grabbed on by a stranger? That's the sick world today. You can get upset with me if you want, and a lot of people do, but I am on the Lord's side. Who do you think God is pleased with, me for taking a stand for decency? Or some slutty singer who is wearing a negligee and is being filmed in sensual, seductive, sexually promiscuous positions to sell a music video? You already know the answer if you love God. Kellie Pickler is a disgrace to America and no friend to the Lord Jesus Christ.

I don't hate anybody and my intent is not to hurt anybody's feelings. I'm simply taking a Biblical stand for God as a Christian who still believes in decency. Ephesians 5:11 commands every believer to refute (expose) all works of darkness. Psalms 97:10 commands us as Christians to hate evil as God hates evil. Women dressing like prostitutes in miniskirts and negligees is definitely evil. It's not a matter of opinion. Exposed cleavages, exposed thighs, tight clothing... only a fool or liar would dare even try to defend such immoral, lewd and whorish attire. 1st Timothy 2:9 commands women to adorn themselves in “MODEST” apparel. You whorish women need to put your clothes back on! Jesus taught in Matthew 5:28 that the thought of lust is adultery. Hence, you ladies who deliberately dress sensually are causing men to commit adultery, which makes you EQUALLY guilty with every man who has sex or rapes you in his mind. Women who dress like whores are asking for trouble.

Please understand that I don't condemn others. I am a big sinner like anyone else. I love God and the Bible. I see so many people these days that talk about how they love God, while making sensual videos portraying sex scenes, destroying marriages and men's souls. 1st Peter 2:11, “Dearly beloved, I beseech you as strangers and pilgrims, abstain from fleshly lusts, which war against the soul.” Did you read that? The Word of God warns that fleshly lusts “WAR AGAINST THE SOUL”!!! Yet, Carrie Underwood, Kellie Pickler, Taylor Swift, Miley Cyrus, Katy Perry and all the other sleazy reprobates are serving the Devil by promoting the lusts of the flesh and; thus, making it a lot harder for men to live right. Our prisons are filling up with men who are losing the battle which 1st Peter 2:11 speaks about. If temptation causes sin, and it does, then women who deliberately causes temptation to pursue a money-making career in entertainment are blaspheming God.

Something is very, very wrong with a television channel that displays hundreds of videos which promote sex, sex, sex while singing about God, family and country at the same time. Why don't they just call it... Country Music Lust Television. CMT is saturated with demonic influences. The Devil creeps into people's homes through the TV...

“Having a form of godliness, but denying the power thereof: from such turn away. For of this sort are they which creep into houses, and lead captive silly women laden with sins, led away with divers lusts.” — 2nd Timothy 3:5,6

Right in Their Own Eyes | God Hears the Cry | ApostasyToday

"That they all might be damned who believed not the truth, but had pleasure in unrighteousness" —2nd Thessalonians 2:12

"Ye have wearied the LORD with your words. Yet ye say, Wherein have we wearied him? When ye say, Every one that doeth evil is good in the sight of the LORD..." —Malachi 2:17

Katy Perry's “Teenage Dream” is a Demonic CURSE to Teenagers!