1st Timothy 5:6, “But she that liveth in pleasure is dead while she liveth.” 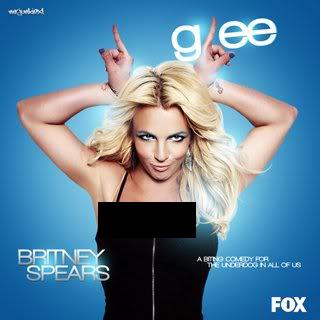 Britney Spears Makes Devil Horns in a Glee Advertisement
It's all a big joke to the wicked world! Signs Of Satan are everywhere!

As of February 2011, Spears has employed the Satanist director Jonas Akerlund to film the video for her new number one song “Hold It Against Me” and has released clips of the video via Twitter. Well, God will hold her wickedness against her on judgment day (Ecclesiastes 12:7,14).

It was named after the Hungarian Countess Elizabeth Bathory who was the most prolific female serial killer in Earth’s history and sexually molested and murdered over 600 young women and children to bathe in their blood to obtain “eternal youth.” One of the band’s many Satanic songs is “Satan My Master.” It seems Akerlund is aiding the major music industry to help brainwash people into accepting the corruption of the New World Order Illuminati. Britney Spears' album Femme Fatale is scheduled for retail release on March 15. SOURCE

Few people realize the connection between Nazism, Heavy Metal, violent crime, pornography, pedophilia, torture, homosexuality, sadism, Satanism and the music and movie industries. There's an entire underground occult (hidden) culture of evil that most people are not aware of in this world.

One example of what I'm talking about is the heavy metal band KORN. Lest you think it's only a small portion of major society that is into this stuff, think again. 16,000,000 Americans have bought KORN's albums. SIXTEEN-MILLION PEOPLE IN AMERICA!!! They've sold 35,000,000 albums worldwide! This world is a wicked place, just as the Bible teaches in 1st John 5:19. Here's their sicko album cover (notice the little girl hanging dead in the shadow). This is the mind of heavy metal satanists (often called, metalheads)...

Britney Spears hired Jonas Akerlund, a known Satanist who performed in BATHORY, a tribute band to a child-molesting serial killer, Elizabeth Bathory. You couldn't make this stuff up!

Here's one of the album covers from the heavy metal band, SACRAMENTUM. The album is a tribute to the satanist band, BATHORY (named after the serial killer of hundreds of sexually molested children and adults, Elizabeth Bathory...

ABOVE: The album cover for the Heavy Metal band SACRAMENTUM. This album is their tribute to the band BATHORY, featuring such songs as "13 CANDLES." The album is pure Satan worship, clearly represented by the Goat Of Mendes (the ram's head on the album cover).

ABOVE: The Heavy metal band, VENOM's 1981 album cover, "WELCOME TO HELL" (clearly displaying the Ram's head inside an inverted pentagram, which signifies open Satan worship; as compared to having the point facing upward, which Wiccan witches use, symbolizing their attempt to conceal their true demonic nature)...

This is what Britney Spears is promoting and representing when she makes the Devil horns in the photo at the beginning of this webpage. This is what everyone who flashes the El Diablo Satanic hand-sign is representing.

Britney Spears is a little witch, ruining the lives of hundreds-of-millions of young girls worldwide by her whorish influence and rebellion against the God of the Bible. Now she's hiring a known Satanist to catapult her career into the stratosphere. Don't you see what is happening? There are millions of young, beautiful, talented, girls who can take Britney's place in a heartbeat. To make it big in the music or movie industry, you have to SELL YOUR SOUL TO SATAN!

You have to hire satanists, promote false religions, commit random acts of shocking immorality, show your allegiance to the Devil, and praise Satan as do the Jonas Brothers. If you want to stay in the game, then you have to support the Homosexual Agenda like Willie Nelson or have Dolly Parton sing Led Zeppelin's occult song, STAIRWAY TO HEAVEN.

Led Zeppelin is the biggest occult band in history. Musically speaking, Led Zeppelin are a great band; but from God's point of view, which ought to be every Christian's point of view, they are of the Devil and should be exposed, not praised. Jimmy Page, lead guitarist of the band, bought an occult bookstore in Europe to educate people in the ways of the occult. He also purchased Aleister Crowley's castle. Crowley is the most infamous satanist of the 20th century.

No parent should allow the hellish music of Britney Spears into their home. If you do, keep in mind that she hires satanists to produce her videos.