Please understand that I don't condemn anyone, for the Bible condemns all of us as guilty, dirty, rotten, hell-deserving sinners. My salvation solely rests in Christ's righteousness, because of the precious blood that He gave for our sins. My intention is not to be unkind; but rather, to expose Satanism in the music industry.

Led Zeppelin is Satanic to the core. In the song "Houses of the Holy," Robert Plant (lead singer) speaks of Satan's daughter and making her garden grow (a sexual reference). The album cover displays naked women crawling towards the top of the temple. It's sickening in the name of decency. Anyone who denies the occult inspiration of Led Zeppelin's music is woefully deceived.

Led Zeppelin idolized and promoted, The Most Wicked Man In The World, Aleister Crowley (the “O” has the long vowel sound in Crowley). Crowley lived from 1875 to 1947. In his publication, THE BOOK OF THE LAW, Crowley writes:

“This book shall be translated into all tongues: but always with the original in the writing of the Beast; for in the chance shape of the letters and their position to one another: in these are mysteries that no Beast shall divine. Let him not seek to try: but one cometh after him, whence I say not, who shall discover the Key of it all. ... With my Hawk’s head I peck at the eyes of Jesus as he hangs upon the cross.”

As you've just read, Crowley speaks of the Beast, admits that his writings are a puzzle to be solved (which he says that the coming Antichrist will solve), and worst of all blasphemes the Lord Jesus Christ. Crowley was a despicable human being who worshipped Satan, summonsed demons through drug usage, impregnated countless women with sex-rituals throughout his whoremongering career, manipulated people, indulged in kinky sex orgies and unspeakable acts of homosexuality, ate the excrement of women during rituals, sacrificed hundreds of children in rituals, filed two of his teeth down so he could bite women during sex, et cetera. You couldn't make this stuff up if you tried.

The guy was a demon-possessed nutcase! Yet, the OTO secret society (more OTO) praise him, and it is purported that President George H. Bush married one of the bastard daughters of Aleister Crowley's adulterous affairs. This shocking claim is spoken as fact in the documentary film... IN SEARCH OF THE GREAT BEAST, ALEISTER CROWLEY. What kind of sick-minded people would praise, idolize, or recognize such a fiend as Aleister Crowley? Led Zeppelin!!!

Led Zeppelin also introduced personal occult symbols and displayed Crowley's law “Do as thou wilt” on some of their albums. Guitarist Jimmy Page of Zeppelin is a devout follower of Crowley. Aleister was a devout Satanist who proclaimed himself as “The Beast 666.” Aleister Crowley was also a 33rd and 97th Degree Freemason and is recognized as the master Satanist of the 20th century. In 1971, guitarist Jimmy Page bought Crowley’s Boleskine House on the shore of Loch Ness where Crowley practiced his Hellish, Satanic sex-magick rituals, including human sacrifices. Guitarist Jimmy Page actually performed Crowley magical rituals during their concerts. Their song “Stairway to Heaven” carries the reference “May Queen,” which is purported to be the name of a hideous poem by Crowley.

The worship of Lucifer, in the form of Pan, was a theme through all of Aleister Crowley’s writings. Jimmy Page has always been an open student of Crowley the Black Magician, and Led Zeppelin was his band. Following the teachings of Crowley, Jimmy Page and company were successful in placing his doctrines in many of their songs, including “Ramble On,” “Black Dog,” “The Battle of Evermore,” “Stairway to Heaven,” “No Quarter,” “The Song Remains the Same,” “Kashmir,” “In The Light,” “Achilles Last Stand,” and “Nobody’s Fault But Mine,” just to name a few. Led Zeppelin even went so far as to command their fans to sell their souls to the Devil in their concert film, “The Song Remains the Same.”

In Fallen Angel, the reader will be exposed to the entire spectrum of occult teachings presented by Aleister Crowley; combined with other renowned occult authors, to provide the truth about Led Zeppelin’s worship of, and propagation of Lucifer. The teachings are thoroughly refuted by this author, presenting the truth of the gospel, including the absolutes of truth presented in the human subconscious. This book has been written to inevitably glorify Lord Jesus Christ in the reader’s mind, especially in the heart and mind of the rock fan who needs to receive Christ as Lord and Savior. The evidence is overwhelming, yet factual, with the Word of God presented as the absolute authority for faith and practice. The objective reader, if a Christian, will be thoroughly equipped to witness to the rock culture; and the lost sinner will see and appreciate his need for salvation in our Lord Jesus Christ.

Page had inscribed in the vinyl of their album Led Zeppelin III, Crowley's famous “Do what thou wilt. So mete it Be.”   Page and Robert Plant claim some of Zeppelins' songs came via occultic “automatic handwriting,” including their popular “Stairway to Heaven.” Stephen Davis in the Hammer of the Gods, details the occult inspiration of “Stairway to Heaven.”

". . . Robert described the 'automatic' nature of the lyric: 'I was just sitting there with Pagey in front of a fire at Headley Grange. Pagey had written the chords and played them for me. I was holding a paper and pencil, and for some reason, I was in a very bad mood. Then all of a sudden my hand was writing out words. 'There's a lady who's sure, all that glitters is gold, and she's buying a stairway to heaven.' I just sat there and looked at the words and then I almost leaped out of my seat.'" (Stephen Davis, Hammer of the Gods, p. 164)

"He [Robert Plant] often remarked that he could feel his pen being pushed by some higher authority." (Stephen Davis, Hammer of the Gods, p. 262) 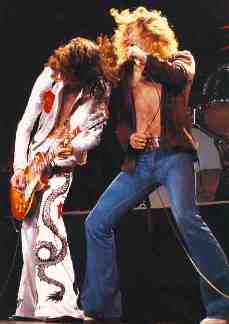 There is no doubt to the occult influence of Led Zeppelin. For a very through, extensively documented history of Zeppelin’s occult inspiration read the 648 page book titled, Fallen Angel: The Untold Story of Jimmy Page and Led Zeppelin by Thomas Friend. Other Rock groups such as Ozzy, Sting, The Beatles, and others have praised Crowley too.

In the photo to the right, you can see the serpents on Jimmy Page's clothing. The Bible tells us that Satan appeared to Eve as a “serpent” in the Garden of Eden (Revelation 20:2). Tragically, evil always finds a willing servant. Anyone who has ever heard “Dazed and Confused” by Led Zeppelin has taken a spiritual journey into Hell. The song is evil and is still used extensively today by Satanists during occult rituals.

It's not surprising that the guitar playing of Led Zeppelin's Jimmy Page is featured in the 1982 hit movie, “DEATH WISH II,” starring vigilante Charles Bronson and Jill Ireland. What's disturbing is that the rapists, punks, thieves and muggers in the movie are listening to Jimmy Page's music on their ghetto boombox. What kind of music do muggers, thieves, rapists, hoodlums and punks listen to? They listen to Rock music! They listen to Hip Hop, Rap, Goth and other worldly types of music. They listen to the Devil's garbage!

As with all occultists, Led Zeppelin promotes occult symbols. The photo to the right displays Zeppelin’s “personal symbols” which are etched in occult images. For instance, “Zoso” was Jimmy Page’s personal symbol and according to Stephen Davis in The Hammer of the Gods (p. 253), it is a “stylized 666.” To further document Page’s “Zoso” emblem’s connection to Satanist Crowley and the number 666, the following page is from Crowley’s book The Equinox of the Gods (p. 253):

Most of the following information is from Terry Watkins of www.av1611.org:

Constance Cumbey, author of The Hidden Dangers of the Rainbow and a notable authority on the New Age Movement, says concerning the symbol:

"On the cover of the Aquarian Conspiracy is a Mobius, it is really used by them as triple six (666). The emblem on the cover of the New King James Bible is said to be an ancient symbol of the Trinity. The old symbol had Gnostic origins. It was more Gnostic than Christian. I was rather alarmed when I noticed the emblem..."
(The New Age Movement, Southwest Radio Church, 1982 p.11)

Tragically, the New King James Version (NKJV) of the Bible uses this same Satanic symbol on the cover (pictured to the left). Now you don't have to be a rocket scientist to figure out that something is very wrong here folks. And yes, the NKJV is straight from Hell. Any symbol cherished by witches and Satanists doesn't belong on the front of a Bible (or anywhere in Christianity). Not one place in the entire Bible did God ever instruct us to use symbols, idols, or icons.  For this reason, it is wrong for any believer to have a crucifix. Jesus is no longer on the cross friend, He is in Heaven on the right-hand of the Father. Rosaries are blasphemy. Statues are idolatry.

The pseudo-Christian rock band, P.O.D., albums is gushing with occult symbols. One of P.O.D.'s logos is the “Triquetra.” The Triquetra is Latin for "three cornered" and signifies the power of three. The Triquetra is very popular in witchcraft, representing the threefold nature of the Witchcraft Goddess as virgin, mother and crone. As Christianity was polluted with many pagan symbols, the Triquetra was falsely adopted by some Christians as symbolizing the Trinity.

On P.O.D.'s website, under the section “Frequently Asked Questions in their forum,” someone asked about the “trinity symbol?” What does the trinity symbol mean?

The symbol is known as a 'triquetra' that is derived from ancient Celtic knot-work and adopted by Christians around St. Patrick's time as a symbol of the Trinity (Father, Son, and Holy Spirit). The interweaving lines represent One being in Three separate, but equal parts. But there is one problem with symbols representing the Trinity, or the Godhead — it is CLEARY FORBIDDEN in the Bible.

Acts 17:29 condemns such symbology: ". . . we ought NOT to think that the Godhead [the Trinity] is like unto gold, or silver, or stone, GRAVEN BY ART [symbols, icons, etc.] and man's device."

The Triquetra is used as the centerpiece for the logo for The Institute of Transpersonal Psychology (ITP). The ITP is a new age school following the Jungian Psychology [occultist Carl Jung]. One of their stated goals is ". . . to reach the recognition of divinity within" (www.itp.edu/about/tp.html) (see Genesis 3:5, "...ye shall be as gods...")

Book of Shadows: Also called a grimoire, this journal kept either by individual witches or Satanists or by a coven or group, records the activities of the group and the incantations used. (Jerry Johnston, The Edge of Evil: The Rise of Satanism on North America, p. 269)

THE P.O.D. SYMBOL and WITCHCRAFT?

The Craft Companion: A Witch's Journal

By Dorothy Morrison, a high priest of Witchcraft.

NOTE: We circled (in YELLOW and RED), and also enlarged to the side The P.O.D. symbol.