Proverb 12:10, “A righteous man regardeth the life of his beast: but the tender mercies of the wicked are cruel.” 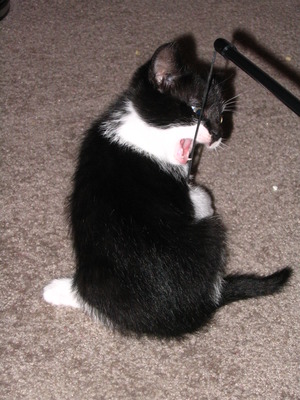 I love animals. In the book, Cat Miracles, by Brad Steiger and Sherry Hansen Steiger, there's an incredible tale of one kitten’s courage: Mr. Stubbs—a black and white kitten—was doused with lighter fuel and then set on fire. The kitten ran into an alley and put the flames out by rolling around on the pavement. Mr. Stubbs legs and toes were badly burned.

Several days later, his front left leg and his back right leg became infected. Eventually, gangrene set in. Mr. Stubbs started chewing off his limbs to the knee. By the time he was found by a passer-by, he had chewed off parts of his two legs and a toe on his right front leg...

“All four of Stubbs' feet and lower legs were badly burned. As days passed, the pain and dying tissue motivated him to gnaw off the parts of his own body that he knew were killing him. The final damage: one of Stubbs' back legs is gone, up to the knee. His left front leg is gone up to the elbow. His right front leg is missing a toe.

This behavior is pure, unfiltered survival instinct. Stubbs was fighting his infection the only way he knew how.”

This little fella was a survivor! Stubbs was taken to the vet who said the kitten had saved his own life by amputating the gangrenous parts of his limbs. During recovery, he learnt to trust humans and veterinary surgeons gave him artificial limbs so he could walk normally again.

What a precious story. I love animals and it is beyond me how anyone could deliberately hurt an animal.

Although I love animals and am glad that Mr. Stubbs had someone to love him back to health, I can't help but think about all the unwanted children around the world, even here in the plentiful and prosperous U.S.A. Whereas terrorists have killed 3,000 Americans since 1990; Abortionists have killed 4,000 Americans since yesterday! Think about that. When I read the rescue story of Mr. Stubbs, and all of the dozens of people involved with the situation, I couldn't help but realize that aborted babies don't even have one soul to care about them.

Imagine if a group of rescuers arrived to save poor little Mr. Stubbs; but armed police stood firm with guns and made sure that Mr. Stubbs didn't get any help, and the law required that Mr. Stubbs would die because someone hated animals and wanted him dead? That's exactly what abortionist do! There is no difference. Armed guards make sure that abortion clinics are free to kill children, and no one dare save any child's life. And the American public is ok with that.

The American public would go ballistic and heads would roll if a kitten were allowed to die. The American public absolutely will not tolerate abuse of a precious little animal; but you can kill a human baby in the womb, no problem. What is wrong with this country?

In 1995, the former “Jane Roe” (real name: Norma McCorvey) of Roe v. Wade, changed her mind about abortion, hired a lawyer and has since tried to overturn the Godless Supreme Court's decision to legalize abortion at a federal level. So far she has utterly failed, the damage is done. She has also announced publicly that she is no longer a lesbian. Unfortunately, she has joined the false religion of Catholicism, jumping out of the frying pan into the fire.

McCorvey has written a good poem though, titled . . .

I sit across from a playground that I visited this eve with a small child.
I know of such places where children play.
I know that I am the cause of them not being here today.
These playgrounds for "innocent children" now dead because of sins I helped do.
I hope, Lord, that the wonderful playground is well guarded with angels.
Angels who will protect them keep them happy and safe.
Angels who will make them smile and laugh.
So that when that glorious day comes; the children will not hold "the sin" against me.
For every time I see a playground empty, I will know that yours will be full.
The sun is now setting, and my heart hurts, Lord.
For the numbers who from abortion have been torn apart.
I pray you can put them back together and make them whole.
If you like, Lord, use my body to make your precious children whole again.
I ask you to do this not only for them, Lord, but also for the love I have for each of them.
Lord, God, you gave your only Son, and He died and shed His blood for us.
All I did was give my baby away so that "women could tear theirs apart."
For this I will never be able to look in your face out of shame.

Women who kill their babies will weep bitter tears of regret and loneliness years down the road, when they see other women with their growing children—who hug them, draw them pictures and say “I wuv you mommy.” Oh how the Devil is a liar! Oh how the Devil pays with counterfeit money! Oh how the Devil kills, steals and destroys!

The thought of a kitten being doused with lighter fluid and set on fire is alarming. The thought of a poor defenseless little animal gnawing his own legs off to deal with the pain is heart-breaking. But what about the precious little children who are legally ruled as being “inhuman,” having their skulls painfully cracked open and their brains mercilessly sucked out, being placed into a vat of acid to be dissolved alive?

Your body stops where your baby's body starts.

And the other needful truth that we learn from this precious story is that, if Mr. Stubbs (so named for chewing his legs down to his stubs) can make it, so can we.

HOW TO GO TO HEAVEN