Homosexuals Want Ernie and Bert to Get Married On TV

Homosexuals are pushing for the producers of Sesame Street to have decades long friends, Ernie and Bert tie-the-knot; yes, get married!!! What's even more disturbing are the reasons provided at We Are Change...

"In this horrific age of LGBT kids taking their own lives, they need to know that they ARE BEAUTIFUL and their lives are worth living. Aside from those that are committing suicide, the bullies that facilitate these tragedies need to learn that homophobia is NOT okay."

Homosexuals are pushing to have the producers of Sesame Street marry Ernie and Bert on TV, as an act of sympathy and healing toward all those LGBT, poor, little, homosexual children out there who are ready to commit suicide because of the big, bad, horrible Christians who believe and preach the Bible. It's sickening that children are being targeted with this anti-Christian propaganda! When the Bible was banned from the schools in 1963, children lost their moral compass, and so don't blame Christians when young people commit suicide.

It's another malicious attempt by sodomites to indoctrinate America's children with the lie that homosexuality is ok. Romans 1:25 said that immoral reprobates, unthankful ingrates and vile homosexuals would CHANGE the truth of God into a lie. The WE ARE CHANGE gang has changed the Word of God into a big LIE. Whereas God says that homosexuality is a sin in Romans 1:24-32; homosexuals are teaching America's children that it's not.

In Genesis 19:1-11, a perverted mob of angry homosexuals surrounded Lot's home and would have violated the guests if it were not for the two angels interceding and striking the homosexuals with blindness. Don't tell me that the Bible doesn't call homosexuality a sin. In Leviticus 20:13 God mandated capital punishment for the sin of homosexuality, as a crime. 1st Kings 14:24, “And there were also sodomites in the land: and they did according to all the abominations of the nations which the LORD cast out before the children of Israel.” Homosexuality and idolatry always co-exist. 1st Kings 15:12, “And he took away the sodomites out of the land, and removed all the idols that his fathers had made.” It is not a coincidence that America's youth are enamored and infatuated with celebrity singer idols who are all lesbians, witches, Luciferian-worshippers, fornicators, drug-addicts, drunkards and homosexuals. Whether it be Katy Perry, Selena, Kesha, Miley Cyrus, Shakira, Madonna or Lady Gaga; they're all leading teen girls today into homosexuality, smuttiness, slutiness and how to be lewd, nude, rude and crude!!! Woe unto America!

Why do you think they removed prayer and the Bible from public (government) schools in 1963? You can't indoctrinate children if they have a weapon to defend themselves. By banning the Bible, America's public school children have been left defenses against a satanic onslaught of lesbians, feminists, God-haters, kooks and Communists. And to make sure that parents have no way of escape around the demonic system, it is now illegal to home school in California. And if that's not enough of a fascist slap to parents, they've just passed a law in July of 2011 that allow homosexuals to change California's school curriculum to include homosexual history and promotional items for the queer-lifestyle.

The WE ARE CHANGE website implies that youth are killing themselves because they are made to feel bad, inferior and left out by a homophobic society. The true problem is that young people have had the Bible taken away from them, and that's why they're killing themselves! Homosexuals wickedly try to lay the blame at Christian's feet for suicides among gay youth; but they have no one to blame but THEMSELVES for rejecting the Word of God and embracing evil. Was the Bible and prayer really all that bad? Teens are committing suicide because they have no moral compass. I don't care how queer homosexuals make society, the Word of God will always stand against them as evil doers and perverts. This is not hate speech, this is THE TRUTH! The truth is hate to those who hate the truth. 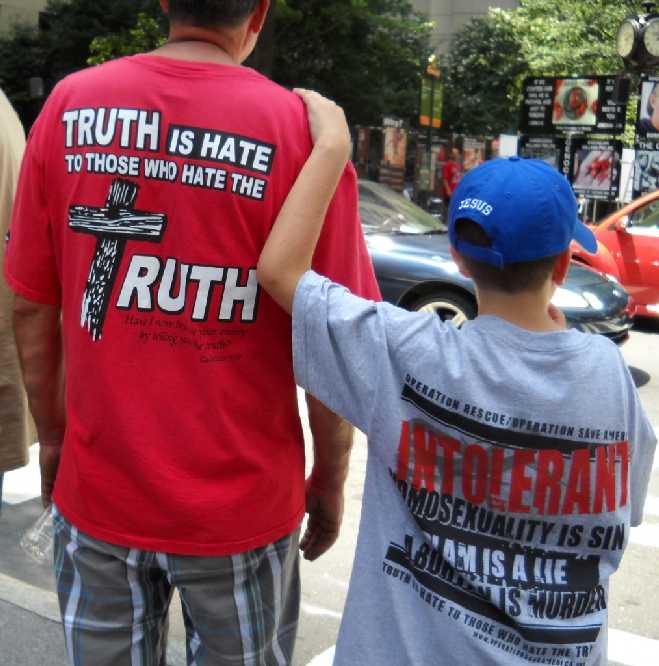 I'll tell you, God is homophobic. If you're not homophobic, then you have a problem. You should feel very uncomfortable about two men having sex together in a bed. Has anybody really thought this through? What a sick and demented thing to do. I don't understand churches that embrace the Homosexual Agenda. That's sinful compromise, not love. No homosexuals are getting saved by apostate churches accepting their queer lifestyle. As my pastor used to say, one mono plus one healthy person equals two people with mono. You will not become what you decide to be, you will become what you decide to be around (and the homosexuals know it).

As the church becomes more worldly, so is the world becoming more churchy. Lutherans, Catholics, Presbyterians, United Church of Christ, Methodists, Episcopalian—these all have ordained homosexual ministers (and there are many other religions doing the same evil works). I even read about a Southern Baptist church that called an ordained lesbian to be their associate pastor. Hey I don't make up the news, I just read it. Truth is stranger than fiction.

I am not trying to be unkind toward anyone. We ought not become gay-bashers, but we should preach the truth. If you are a homosexual, I can tell you assuredly that God loves you more than you could ever imagine (John 3:16; 1st John 3:16). Jesus died for THE UNGODLY (Romans 4:5) which includes myself, and every person in this world. Jesus only died for ungodly sinners like you and me. We are saved by Christ's imputed righteousness, which is why even the vilest of sinners can be saved by simple trusting-faith in Jesus as the Christ, the Son of God (John 20:31).

Ernie and Bert need to get saved!

How Permanent Is Your Salvation?

“The mark of the child of God is that he loves everybody!”
(a quote from Pastor Jack Hyles' classic MP3 sermon, “FORGIVENESS

“There is power in this Gospel message. Most people just don't know how to
present it... The clarity of the Gospel is what makes it easy for them to believe.”
—Pastor Yankee Arnold, a precious quote from the excellent MP3 sermon titled, “WHY GRACE CAN SAVE THE WORST MAN!”

Notice that Jesus said “ye will not come,” not ye cannot come.

Jesus came to SAVE SINNERS!  |  They “Knew Not Until the Flood Came”

Why are the churches silent?

Homosexuality is a Sin! | Changing God's Truth Into A Lie

God created Adam and Eve, NOT Adam and Steve!

Homosexuality Is A Filthy Sin!

The Communist Subversion of America's Kids!

That's just sick! Have they no shame at GLSEN? Can you imagine, trying to teach Ronald that it's ok to stick something in Timmy's backside? ...or that it's ok for a boy to become a girl? What has American society deteriorated to? It is tragic. Any honest child knows that God created Adam and Eve; not Adam and Steve. GLSEN are a bunch of sickos!

“Who being past feeling have given themselves over unto lasciviousness,
to work all uncleanness with greediness.” —Ephesians 4:19