The World Has Gone Insane! 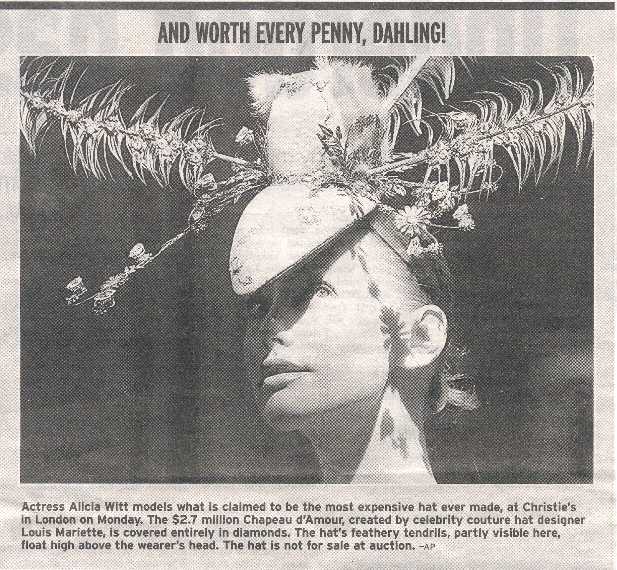 While children are starving to death around the world, fools like this are spending millions to make a hat. It is beyond comprehension. Truly Satan is the god of this crazy world. The Devil must be a real sicko! How could anyone justify WASTING so much money on foolishness when the poor are starving to death; while children are eating mud cookies and bugs to survive; while the wicked are living high-on-the-hog.

“There is a generation, whose teeth are as swords, and their jaw teeth as knives, to devour the poor from off the earth, and the needy from among men.” —Proverb 30:14

The poor need our help. Don't just give money to any charitable organization, find out exactly where every penny of the charities' money goes? Don't support any "non-profit" organization where the top executives make six-digit salaries...

According to Forbes the Salvation Army's top dog, Todd Bassett, took home $175,050 from the "CHARITABLE" organization's donations for the fiscal year ending in 2004. $175,050? That's ridiculous! I wonder how many Santa Claus buckets needed to be filled to pay Mr. Bassett's extravagant salary? I wouldn't give a dime to the Salvation Army. Mr. Bassett is PROFITING greatly for administrating a "non-profit" organization. People are so naive and gullible nowadays.

The Apostle's didn't go out on a spending-spree with the money given to them, buying steak dinners, purchasing fancy clothes and vacationing in Hawaii. No, they distributed the money to the THE NEEDY AND AFFLICTED... "And laid them down at the apostles' feet: and distribution was made unto every man ACCORDING AS HE HAD NEED" (Acts 4:35). God deliver us from selfish and covetous pastors who want every penny you have in the bank.

Do your homework. Better yet, give money directly to the poor and then you'll know where every penny goes. If the Salvation Army can afford to pay someone $175,050 a year, then they WON'T get a dime from me. 1.3 million Americans lost their homes in 2007. 1.9 million Americans lost their jobs in 2008. I wonder if Mr. Bassett is struggling financially. Charitable organization? Think again!

Without Jesus Christ, mankind is hopeless. From Florida's nude beaches to Sin City Las Vegas, Americans have forgot God. We are a spoiled nation of mambe-pambe brats, ingrates who are easily offended, filled with hatred and deserve for some nation to invade and conquer us. Americans need to be humbled.

Our planet is fast-becoming a large insane asylum and America is leading the way.