Globalization Will NOT End World Hunger

This is an excerpt from Anita Roddick's book "Take it Personally."

"The globalization of agriculture fails to address the world's hunger crisis. In fact it makes it worse. During the past two decades, the total amount of food in the, world has increased, but so has hunger.

The main problem is that globalization of food production pushes small, self reliant farmers off their lands and replaces them with large chemical and machine-intensive corporate farms. It does not emphasize food for hungry local communities. Instead, it encourages exports resulting in monocultures - a single crop grown over thousands of acres. These crops are usually luxury items cultivated for export and are notoriously vulnerable to insect blights and bad weather, and cause soil infertility. 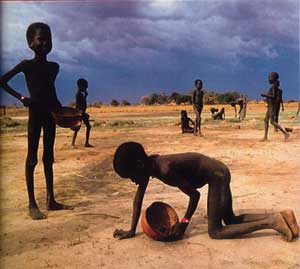 Starving children searching for insects to eat in Sudan
From 'Take it Personally' Anita Roddick.

Global biotechnology companies claim they have the answer to world hunger. But biotech production does nothing to solve local hunger problems. Does anyone believe that the invention of biotech plants whose seeds are sterile - forcing farmers to buy new seeds every year - has anything to do with stopping hunger? The biotech industry's goal is not to feed the hungry, only to feed itself."

A recent United Nations study confirms that the world already has enough food. The problem is one of distribution. Global trade rules put food production and distribution in the hands of agribusiness giants, supplanting the traditional system of local production for local consumption.

The world is producing the wrong kind of food, by a process that leaves millions of people landless, homeless, cashless, and unable to feed themselves.

Is it any wonder that there is huge resentment against the west?

Researchers have found that the average American family throws away 1.28 pounds of food per day, for an annual total of 470 pounds per household, or 14 percent of all food brought into the house...

A new study reveals that American households throw away some 470 pounds of food per year.

Most people don't give a second thought to the half eaten dinner that finds its way to the trash, or the expired milk that's poured down the drain when it starts to smell funny. But to Tim Jones, a researcher at the University of Arizona's Contemporary Archaeology Project, this kind of garbage is fascinating stuff. In fact, Jones and his students spent the past year sifting through the garbage of 200 American families for the express purpose of finding out how much edible or once edible food gets thrown out each day.

Jones's study is part of a partnership with the US Department of Agriculture designed to find out how much food is lost on its journey from the farm to supermarkets, restaurants, homes, and eventually, to our bellies. Previous studies estimated that Americans tossed about 150 pounds per household per year, but these figures are 25 years out of date, and researchers suspected that the real number may be higher.

Learning how much food people throw away each day sounds easy – just ask them, right? Not so fast, says Jones. "The everyday kinds of behaviors that we do over and over again are not well remembered," he says, and most people aren't even fully conscious of repeated behaviors like preparing and serving food. So rather than depending on self-reported behavior, Jones and his researchers needed a way to actually measure the amount of food that ends up in the garbage.

To do so, the team rounded up families in Delaware and Arizona and interviewed them about their eating habits, collected grocery receipts, and then dug through their trash to catalogue and weigh every last lima bean, chicken nugget, and slice of cake that ended up in the garbage.

The results, Jones says, were eye-opening. "Some people believe that you cannot really store food safely in the fridge. Anything that's left over automatically gets thrown in the trash," says Jones. "Then there are households, where, well, as long as it's not gooey or furry, you can eat it. It you take a bite and it tastes OK, you can eat it." Overall, the researchers found that the average family throws away 1.28 pounds of food per day, for an annual total of 470 pounds per household, or 14 percent of all food brought into the house. That's three times the amount previously estimated – and Jones expects the number the climb when researchers add in food that's washed down the garbage disposal or fed to the family dog.

Why do people throw away so much food? The reasons, says Jones, are varied. Some people practice poor planning, and some are influenced by the perception of what they should be eating. "People think oh, I should eat well, so they buy all these fruits and vegetables," Jones says. "Then they come home at 10:00 after work and pull out a frozen dinner." By the time the weekend rolls around and people have time to cook, the vegetables have turned to mush. In part because of this "guilt buying" Jones says, people end up throwing away about a third of the fruits and vegetables they buy.

Other factors that affect food loss are warehouse stores that encourage customers to buy in bulk, and moving habits. Jones found, for instance, that low-income families, who tend to move a lot, throw out the largest amounts of packaged food.

Jones agrees. "The big cost of food loss is environmental," he says. "Growing stuff on a farm reduces the productivity of the land. You have to use pesticides that cause more pollution...Loss of that food means losses of nutrients out in the fields."

The Reason Why You Shouldn't Give Money to Big Charities

I am disgusted with America's charities, who pay their executives 6-digit salaries. Children International asks for donations of $22 per child to provide food, medical, education and other needs. Yet, their CEO was paid $347,381 in 2007! It is appalling to me that an organization that stresses how far a mere $22 will go per month, pays their CEO $347,381 a year! That's just plain wrong in my opinion. Anything can be justified, but that doesn't necessarily make it proper or ethical.

The Salvation Army isn't quite as bad, they only paid their CEO $175,050 in 2004. No doubt, they have all kinds of excuses to justify such outrageous salaries; but no one needs that kind of salary, and it is certainly unbecoming of a so-called “charitable organization.” I realize that top executives are often paid high salaries for their fund-raising abilities and expertise; yet, it's just inconsistent with all the plethora of ads we see begging for our donations, which might mean “life or death to some child.” If that's the case, just think how many more children's lives could be saved if the CEO's of these fat cat charities were to give back 80% of their salary, God forbid, and actually have to live on $75,000 a year! My, oh my, how would they survive?

What gets me is that a charitable organization can actually pay their CEO $375,000 a year and still be rated by the BBB as a great company. Not in my book! The BBB is a joke in America! Many companies who support the BBB are given preferential treatment. In my opinion, you can't trust information from the BBB, nor from America's big charities.

A lot of people give money to charities to boost their public image, feel good about themselves or to find a tax write-off. It is a sore evil in America. While an estimated 18,000 children continue to starve to death daily throughout the world, and others eat bugs to survive, America's biggest charities continue to pay their top executives outrageous salaries. It is a false balance in God's eyes. Few people realize these days that America's charities have become lucrative businesses.

My advice to people is to find some poor person and give the money directly to them. There are many poor people today, and others who have lost their jobs, or are homeless, and you can be a blessing to them directly. And best of all, you know that 100% of the money is going to charity, and not helping to pay someone's $600,000 salary! Really, it is insane to pay someone that kind of money in a so-called “charity.”

Who do you think will appreciate your money more... some fat cat charity or a struggling family who has no income?

If you DO decide to support any charity, demand a financial report of where the donations are being spent. This way you can see first hand where your money is going, and can make sure that you're not buying someone a mansion in the suburbs. Don't accept a vague summary, kindly ask for specifics. If they don't disclose such information, give elsewhere. Honestly, too many people are abusing the system today, living extravagantly on donations, because people don't think.

I just can't in good conscience drop my money into a Santa Claus's bucket at Christmas time, when I know the top dog at the Salvation Army is getting paid $175,000 a year!

I cringe when I hear ads telling people how much their $22 a month can do to better a poor child's life, knowing that the CEO of that charity got paid $347,381 in 2007! Yet, so many people sit at home, staring at some picture of a child they're supporting for $22 a month, failing to realize that the CEO of that company makes 15-TIMES what the average American family gets paid annually. No CEO of a charitable organization ought to be paid more than $47,381 a year, which leaves $300,000 remaining from this guy's salary. For $22 per month, $300,000 can help an additional 1,136 poor children! Yet, the charity appeals to the American public, from families who are struggling financially to live on $30,000 a year, to give $22 per month. The whole charity scene in America is enough to make one want to go vomit.

Furthermore, most of those big charities don't share the Gospel with the people being helped. Even the Salvation Army is more Army than Salvation these days. When you give money directly to the poor, you can witness to them concerning Jesus Christ, or give them a Gospel of John. Just think how much further your money can go by giving it directly to the poor. I am a firm believer in helping the poor, but not through some fat cat organization that keeps back $600,000 a year for it's CEO. That's crazy!