The World is Like the Titanic
“It is unsinkable. God Himself couldn't sink this ship...”

April 10th, 1912. The largest ship the world had ever known set sail on it's maiden voyage from Southampton, England to New York City. People thought it was the safest ship in the world. It had a double hull, with 16 watertight compartments and men thought it was unsinkable. The Titanic had received at least FIVE warnings about icebergs ahead and yet no one took the warnings seriously. The titanic didn't change its course, nor did it slow its speed. Then it happened, just before midnight. ICEBERG DEAD AHEAD! The crew panicked, but it was too little, too late, and the ship went down at 2:20 a.m. into the icy Atlantic ocean to a frigid grave. Warning after warning after warning were received by the Titanic, but they didn't listen. 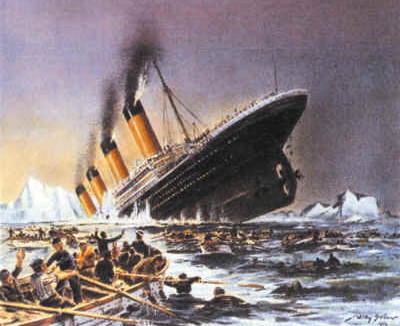 Although Titanic was the latest and greatest vessel afloat, boasting the latest equipment, and decorated in a style more lavish than any hotel of the era, its radio room was little more than a cupboard with a Morse Code transmitter and key, like the one pictured here on the left. Radio communications were not exactly in their infancy in 1912, but they still relied on Morse Code as the primary communicator.

Morse Code was adequate, but hardly efficient. It required an operator to sit listening for incoming messages and warnings. It was not like a modern day fax machine or telephone, where a sent message can be recorded or saved until the person it is for can read it. An operator had to sit, often for very long hours, in a room the size of a closet, receiving and transmitting messages to other shipping, as well as to land stations too. A combination of short and long signals, known as dots and dashes, were interpreted by the operators and written down. They were then passed on to the appropriate officer, or to the purser if the message was for a passenger.

Titanic had two radio operators, although they were not strictly speaking part of the crew. Senior operator John (Jack) Phillips, pictured top left, and his junior, Harold Bride, below left, were actually in the employ of the British Marconi Company, whose equipment was installed on board, but they were paid by the White Star Line. Between them, using a mutually agreed shift system, they kept the radio in operation 24 hours a day, although this was not required by law at the time, and it wouldn't become law to do so until after the sinking.

The transmitting equipment was probably the most powerful aboard any vessel of the time, at 1.5kw, and during the day, the operators had a 400 mile transmission range. At night, the range could increase to nearly three times that distance, the messages being sent and received via the large antennae slung between Titanic's two masts.

As Titanic had left Queenstown, Ireland, the radio traffic had consisted mainly of messages for, and from passengers. It was the job of the operators to intercept messages for their ship, and also to intercept general messages and warnings regarding the area the ship was sailing in to, a kind of advanced warning.

Each radio station had its own call letters, 'MGY' being the ones assigned to Titanic, and 'MKC' was her sister vessel Olympic. As well as the call letters, Titanic was also assigned 'ADVISELUM', this being the code-word for passengers' private messages.

Ice is a seasonal hazard in the unforgiving winter seas of the North Atlantic, and in the couple of days since leaving Southampton, many ships had reported ice in the exact area into which Titanic would be sailing. On the 11th April, she received 6 warnings from ships stopped in, or passing through, heavy ice, 5 more on the 12th, 3 more on the 13th, and 7 on the 14th.

All of these messages would have been written down as they were intercepted, logged in the radio book, and passed on to the officers on the bridge. There was now no way that the Captain, along with the officers, would have been unaware of the huge field of ice that now lay directly in front of Titanic.

The world today and the United States are like the Titanic. The truth is everywhere, but people won't listen. We know as Christians that something big is about to happen, but the dead world doesn't care. They think everything will continual as usual forever. The Bible says that this world, as we know it, is going to end.

Daniel 12:4, “But thou, O Daniel, shut up the words, and seal the book, even to the time of the end: many shall run to and fro, and knowledge shall be increased.”

We are living in the information age. Just by searching the internet, information can be acquired in mere seconds which once took months to obtain. Men today can send a robot hundreds-of-millions-of-miles to sample dirt on Mars and then transmit that information back to the earth in seconds. Men have learned to harness the sun's energy, generating thermonuclear fusion in China to power their homes.

Yet, millions of people are starving from famine. Can you imagine? We can split the atom, perform microscopic surgery on the human body using robots, store the whole of man's knowledge on a single microchip; and yet we can't prevent starvation? It is man's wickedness that is the culprit.

In every way the world is crumbling—financially, morally, economically, educationally, nationally, et cetera. Just like the foolish people on the Titanic, the world's masses today are ignoring the warning signs of approaching disaster, danger and destruction. The world is on a crash course with destruction.

As it Was in the Days of Noah

Luke 17:26-27, “And as it was in the days of Noe, so shall it be also in the days of the Son of man. They did eat, they drank, they married wives, they were given in marriage, until the day that Noe entered into the ark, and the flood came, and destroyed them all.”

This describes the world today—a wicked, evil and Godless place. The wickedness of mankind is unprecedented. In February of 2010, a Teenage student sold her virginity online for £20,000. Can you imagine? Here's what parents are resorting to in China to care for their children while at work. People in Haiti are eating mud cookies to survive. Americans praise witches. America has gone to Hell.

Young girls today, they want to have fun. Young girls today just wanna party. Today young girls wanna go to a nightclub and have open sex on the floor of the nightclub, and then put it on YouTube, and if they should get pregnant they want to throw the baby into a dumpster. No morals. No self-respect. No nation. No borders. No language. No culture. No responsibility. Now that's the world today!

Romans 10:16, “But they have not all obeyed the gospel. For Esaias saith, Lord, who hath believed our report?”

Notice carefully “they knew not until the flood came, and took them all away.” Could they not have known? Yes, of course, but they DIDN'T WANT TO KNOW. While Noah was preaching, they couldn't have cared less. Noah preached for 120 years!!! Genesis chapter 6 describes an evil and wicked world that didn't care. They ignored Noah's message of righteousness.

The Bible foretold that scoffers would come in the Last Days . . .

2nd Peter 3:3-4, “Knowing this first, that there shall come in the last days scoffers, walking after their own lusts, And saying, Where is the promise of his coming?”

Everywhere we turn nowadays we see people selfishly eating, drinking and giving in marriage as it was in the days of Noah. They were just going on with life as usual and didn't care about the truth. In the face of impending doom, they didn't know what was about to happen to them because they didn't listen to Noah's message. They didn't want to know. They didn't care. The flood came and swept them away to destruction. Most people alive today are going about life as usual, eating, drinking and giving in marriage; while totally ignoring THE TRUTH of God's Word and what's really going on in the world today.

Apostasy in the End Times