Stephen Hawking Is Not An Atheist Anymore!

Hebrews 10:31, “It is a fearful thing to fall into the hands of the living God.”

The very second that theoretical physicist, Stephen Hawking (1942-2018), entered into eternity, he was no longer an atheist. Romans 1:20, “For the invisible things of him from the creation of the world are clearly seen, being understood by the things that are made, even his eternal power and Godhead; so that they are without excuse.” Mr. Hawking was a damned fool! Proverb 14:1, “The fool hath said in his heart, There is no God. They are corrupt, they have done abominable works, there is none that doeth good.” Sadly, Mr. Hawking now tragically KNOWS that God exists, and he is burning in Hell, having perished in his sins and unbelief.

Stephen Hawking foolishly said, “An expanding universe does not preclude a Creator.” That is a senseless assumption based upon finite human reasoning! How in any way does an expanding universe deny an omnipotent Creator? It doesn't! Zechariah 12:1,“The burden of the word of the LORD for Israel, saith the LORD, which stretcheth forth the heavens, and layeth the foundation of the earth, and formeth the spirit of man within him.” Stephen Hawking spoke boldly in his atheistic rhetoric, as one alleging to have scientific authority, but he never proved anything to anyone. He was a fool who was bold in his blasphemy against a holy God! ...

“I regard the brain as a computer which will stop working when its components fail,” he told the Guardian. “There is no heaven or afterlife for broken down computers; that is a fairy story for people afraid of the dark.”

“God is the name people give to the reason we are here,” he said. “But I think that reason is the laws of physics rather than someone with whom one can have a personal relationship. An impersonal God.”

If Mr. Hawking had embraced Christianity, I can assure you that the world would have abandoned him long ago. He never would have seen the inside of a space shuttle. Nor would he have been invited to numerous foreign countries. The heathen world loves their own Jesus said. John 15:19, “ If ye were of the world, the world would love his own: but because ye are not of the world, but I have chosen you out of the world, therefore the world hateth you.” If you become a born-again Christian, and make it known publicly, the world will hate you and desert you quickly! Stephen Hawking was a celebrity atheist fool. Like comedian George Carlin, Mr. Hawking was an icon in the atheist community. There are no atheists in Hell!!!

Hebrews 10:31, “It is a fearful thing to fall into the hands of the living God.”

The Holy Bible has much to say about FEARING GOD! If you don't fear God now, you will in the future. YOU WILL FEAR GOD TOMORROW! Proverbs 16:6, “By mercy and truth iniquity is purged: and by the fear of the LORD men depart from evil.” Ungodly men like Stephen Hawking don't fear God, which is why he tragically went to Hell forever to pay for his own sins. Romans 3:18, “There is no fear of God before their eyes.” Dr. Hawking could have had the free gift of God, which is eternal life, simply by believing the Good News of Jesus Christ crucified, buried and risen the third day for our sins!!! But as a fool, Dr. Hawking rejected Christ!

What saith the Scripture? ...

Psalms 111:10, “The fear of the LORD is the beginning of wisdom: a good understanding have all they that do his commandments: his praise endureth for ever.”

Proverbs 1:7, “The fear of the LORD is the beginning of knowledge: but fools despise wisdom and instruction.”

Proverbs 1:29, “For that they hated knowledge, and did not choose the fear of the LORD.”

Proverbs 2:5, “Then shalt thou understand the fear of the LORD, and find the knowledge of God.”

Stephen Hawking was puffed-up in his worldly knowledge, blinded by the Devil, “Ever learning, and never able to come to the knowledge of the truth” (2nd Timothy 3:7). It is hard to write this article, because it breaks my heart to know that Dr. Hawking is in Hell this minute, and will suffer in the torments of the Lake of Fire for ever and ever. Revelation 20:15, “And whosoever was not found written in the book of life was cast into the lake of fire.” Is your name written in the Lamb's Book of Life dear reader? It can be for free, right now, if you'll simply receive Jesus Christ as your personal Savior!

In the latter years of his life, Dr. Hawking said that his worst fear is rich people, who would use genetic engineering to advance themselves to become “superhumans.” What foolish talk! Proverbs 29:25, “The fear of man bringeth a snare: but whoso putteth his trust in the LORD shall be safe.” Mr. Hawking refused to put his trust in the Lord! Instead, he put his trust in man's limited knowledge of science. In harmony with the Scriptures, Dr. Hawking was “Ever learning, and never able to come to the knowledge of the truth” (2nd Timothy 3:7). Toward the end of his life. Hawking was in diligent pursuit of alien life in the universe. Strangely enough, the same guy adamantly denies the possibility of an omnipotent Creator. Go figure! Could not God be an alien? Is not God by Biblical interpretation, extraterrestrial? What an indictment against atheists, showing their blatant sinful rejection of the truth of God's Word, who readily admit the possibility of alien life in the universe, while boldly denying the existence of the holy God of the Bible!!!

Atheism is folly as much as wickedness. But suffer me, before I show this, to say, that it is absolutely impossible that any man can be an atheist, in the strict sense of that word. All that any can say is this: “No spot that I have searched does reveal a God; every organization I have examined does not show traces of wisdom, goodness, and design:” but that individual cannot say; “There is no God;” because he cannot say, “I have soared to the farthest star, I have descended to the deepest mines, I have swept all space, and searched all time, and in the realms of infinite space I have not detected any traces of a God.” In other words, to be able to say, “There is no God,” you must yourself assume to be God, which is a reductio ad absurdum, an utter and a complete absurdity.

What a brilliant observation! How can any man claim to be an atheist unless he has traveled to the farthest place in the universe? The nearest star to the earth (after our own sun) is Alpha Centauri, which is 4.37 light-years away (28,200,000,000,000 miles away!). This is just one star, being the closest to earth besides our own sun, which is 93,000,000,000 miles away. My friend, the Hubble Space Telescope has discovered that there are at least 200,000,000,000 galaxies in the universe. And each of those galaxies contains BILLIONS of stars! It is anticipated that when the James Webb Telescope is launched in 2021 from NASA, that it will discover over ONE TRILLION GALAXIES!!! In consideration of such unsearchable greatness in the universe, it should become utterly obvious how ignorant, foolish and wicked it is for anyone, in this case Dr. Stephen Hawking, to dismiss the possibility of a divine Creator. Who can honestly say that?

Furthermore, we have a wonderfully authored Holy Bible (the King James Bible)—the amazing origin of which can only be explained by divine inspiration. The truth is that men love darkness rather than light, because their deeds are evil. John 3:19, “And this is the condemnation, that light is come into the world, and men loved darkness rather than light, because their deeds were evil.” That is why Stephen Hawking rejects the knowledge of God, “Professing themselves to be wise, they became fools” (Romans 1:22). 1st Corinthians 3:19, “For the wisdom of this world is foolishness with God. For it is written, He taketh the wise in their own craftiness.” God took Stephen Hawking in his own craftiness, and now he will have everlasting damnation to think about it.

There are no atheists in Hell. I guarantee you that Dr. Hawking in no longer an atheist. He is a believer now, but it is too late for him. Fortunately, it is not too late for you dear reader! Have you ever been born-again? Was there ever a time in your life when you faced the reality that you are a guilty sinner, under the condemnation of God's law, deserving of punishment in Hellfire forever and ever? Did you realize that Jesus Christ paid your sin debt with His precious blood, by becoming the sacrifice for your sins on the cross? And did you by faith (trust) accept that sacrifice as full payment for your sins, believing that Jesus resurrected from the dead three days later? This is the Gospel (Good News) by which we are saved if we believe (1st Corinthians 15:1-4; Romans 1:16). If Christ's sacrifice on the cross is your only hope for the forgiveness of your sins and eternal life, then you are saved! John 6:47, “Verily, verily, I say unto you, He that believeth on me hath everlasting life.” 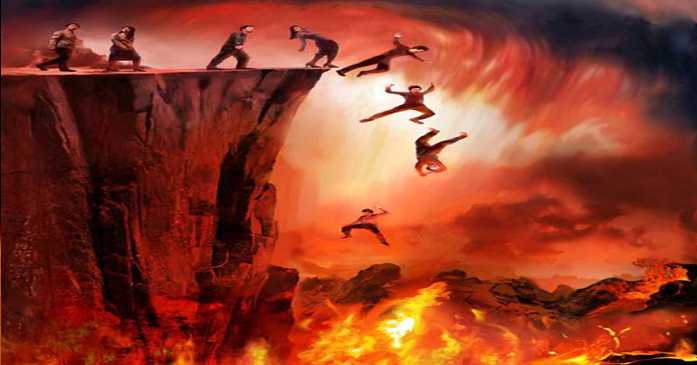