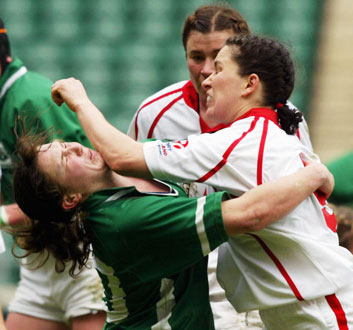 There are many factors that shape the values and priorities of our youth in this age. One factor I have noticed in the lives of many youngsters is that of organized, competitive sports.

Historically, the influence of sports was predominantly seen in lives of boys and men. Today, however, both sexes seem to be affected.

Whereas young women of a few generations ago were diligently taught by their mothers and grandmothers how to keep a house, clean, cook, bake, sew, care for and desire to have children, and many other such domestic skills, today a young woman searches in vain to find time with her mother. For you see, Mom is putting in 40 hours a week on the job to help pay the mortgage installment debt, and keep the comfortable lifestyle to which the family has become accustomed.

Not only does the average girl have no knowledge of how to change a diaper and care for a baby, she probably does not desire to be a mother anyway. She has learned from her family and her peers that you cannot afford children, they get in the way, are a tremendous responsibility, a mess, a bother, and besides, the world is overpopulated anyway, is it not?

Our contemporary young lass is an expert in some areas however. She may be aware of the latest contemporary "Christian rock" stars, she can "slam dunk" the basketball as well as being proficient in several other sports.

If our great-grandmothers would arrive at a modern Christian school girls' basketball game, they would recoil in the horror as they would watch physically developed girls running around in brief outfits that expose their thighs and bouncing bosoms to the lustful eyes of any man wishing to look. Moreover, they would be shocked as they would see girls trying to "kill the opponent," yell, scream, fight, and in general, act in every way like a man.

Whatever happened to girls who studied to have a servant spirit and to be quiet, meek, demure, and shame faced? How are we training our girls to be meek, quiet, and submissive wives by encouraging them to "win at all costs," knock over your opponent if necessary, be loud, froward, and physical, while being dressed immodestly and while acting in a very masculine manner? Just because the world encourages these qualities in their daughters, must God's people do the same? Is it any wonder many girls from Christian backgrounds consider motherhood and being a housewife as being unfulfilling, a bore, unexciting, and beneath their dignity.

Moreover, many of these sports heroines have developed such boldness and forwardness from their sports activities, that they disdain the traditional and Biblical role of women. To such a girl, the Biblical mandate to be in submission to her husband and to even reverence him (Ephesians 5:24, 33) is outdated and unrealistic. She instead finds the raucous demands of "feminists" and the women's liberation crowd more to her liking. After all, marriage is a 50/50 proposition is it not? She thinks to herself "I have just as much say around here as he does, don't I?"

When such a girl marries, she is so quick and eager to establish "fairness" in her marriage, that she finds her marriage ending up in frustration, disillusionment and divorce.

Not only has the Christian world allowed organized, competitive sports to help in robbing its daughters of their Biblical feminine role, its sons are in equally perilous straits. Many of our sons have contemporary sports figures as their heroes!

Gone is the sports figure who is a clean-cut, wholesome model for our youngsters. Organized sports now has unionization to insure their already astronomical salaries and perquisites, as well as add to them if possible. Greed, selfishness, and monetary gain have replaced the desire to play for enjoyment or recreation. Longhaired, tobacco-chewing, liquor drinking, foul mouthed, immoral, dope-heads ought not to be the subjects of our conversation, admiration, or interest. Whereas not every sports figure is guilty of this lifestyle, it is all too characteristic of many of them.

I myself have witnessed parishioners glancing at their watches if the sermon was getting long! They may miss a part of the game if the service doesn't end soon! So much for allowing the Holy Spirit to speak to the sports enthusiast during the preaching or invitation. Others miss the services of their local church altogether in order to watch their chemically dependent sports heroes on TV Whatever happened to our sense of eternal values? What are we teaching our children about attendance at God's house?

I personally hope the sports figures lose every game they play on Sunday! Some of them claim to be believers. I can only accept their profession, but I cannot help but wonder about their testimony: missing worship services to play on the Lord's Day and tempting others to desecrate the Lord's Day by watching them. Not only so, but how can they glorify Christ by being the professional performer who is paid by the soul damning liquor traffic and tobacco industry? Can they say they are being uniquely and particularly used of the Lord as the announcer interrupts coverage of the game to encourage the fans to drink liquor and use tobacco products?

I am informed there was one professional player who refused to play on days when he regularly worshipped. Sadly, this was not a Christian, but a Jew. I hope there have been some Christians who have had similar character, but I have not heard of any.

Whereas I can understand the interest of the world in professional sports, I cannot understand or appreciate Bible believers being supporters and fans of a movement so filled with the world carnality, wrong character, and sinful practices.

If you see your son worshipping and emulating several of his longhaired sports heroes, parents you are at fault. You have either encouraged this by your example, permission, or default.

Precious financial resources in Christian education are often siphoned off into organized sports that could have been better spent on soul building, character building projects. What is the value of our sons winning trophies and breaking records if they have little or no interest in serving the Lord, Scripture memory, and leading a soul to Christ?

In my opinion, a youngster who learns obedience and humility toward his authority, separates himself from this world and all it has to offer, and chooses to pick up the bloodstained banner of the cross, has chosen an infinitely better course than the sports hero who may be very carnal.

Whereas the latter has popularity and notoriety with his peers, the former is popular with God! It seems to me that those of us in Christian Education need to be careful of our priorities in this area.

What about the Christian school or Bible college, which through its obedience to the Biblical doctrine of separation, has achieved a good degree of purity and high standards in its student body. What a shame to see this sacrificed in the name of competitive sports when that same school begins to compete against other schools in a league or conference that would mock or ridicule those Godly standards. Many schools recognizing the danger of exposing their youth to carnality and worldliness, have wisely chosen to limit athletic activities to events among only their own students.

If a Christian school does not field a basketball, baseball, or soccer team, etc., they are almost made to feel second rate or inferior. Perhaps they have chosen the wiser course? Certainly all athletic activities are not sinful. In fact, Paul says there is a little profit in exercise. But how careful we must be in what priorities we are teaching our youth.

Parents, if your children are normal, they probably have some "heroes" whose lives they are following with admiration and interest. They also probably have absorbing interests beyond their household chores, family and school work. If those heroes and interests are sports figures and sports events, can you honestly say this will help them to grow in the grace and knowledge of Christ?

Sports and sports figures are tremendously popular, but since when does a Bible Christian approve of and endorse something based on its popularity? In fact, Scripture says the opposite: "Thou shalt not follow a multitude to do evil." (Exodus 23:2).  Instead, we must ask, is it right? Does it please God? Will it draw me closer to the Lord?

by Ronald E. Williams, Director
Hephzibah House
508 School St.. Winona Lake, IN 46590
Reprints may be obtained from above address