The Dangers of ECUMENICALISM

The Beatles can sing “Come Together,”
but the Christians must sing “Come Out of Her!” 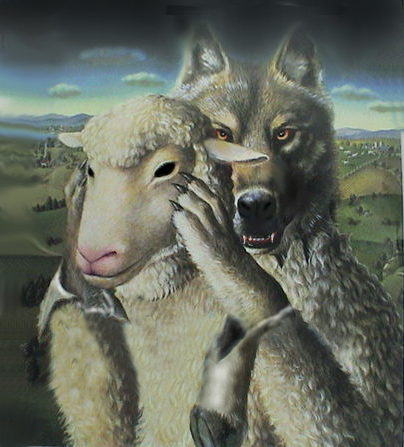 Like nothing else in many years, the latest Attack on America has certainly brought forward and emphasized the demonically designed worldwide ecumenical movement.  Here is an entire nation created by throwing all sorts of ingredients into the pot all bowing together; all religions under one roof praying with each other to all sorts of differently designed gods with the only thing in unity is the spelling of the word g-o-d.  To most people in America now, it seems like a great way to be united, etc. but when one again considers the Scriptural element of the whole situation, one would find out that God is not pleased with these actions.

You know - the Scriptures - that Book that each of those religions got their start from - but with a little wrong division there, we have massive confusion all based around a mess.

The prevailing philosophy of the last days desires that all professing religions join together in unity regardless of doctrinal integrity. It used to be just 'Christians' who made this call, but we should notice that the other world religions are moving in, if not only on America soil do they play that game.

"Ecumenical" means worldwide, universal. The ultimate goal of the ecumenical movement will be to bring all religious groups together into one worldwide group, if not in organizational unity, at least in sympathy of the movement.  In their words, we may not all be Catholics or Methodists, Muslim or Lutherans, etc., but we all still worship the same God; but we do it in 'our own way'; so naturally, because we are sincere about our love & worship, we can be sure God DOES hear us because God is love & if we love each other, then certainly God must love us.

(1) There is THE ADMINISTRATIVE LEVEL of the ecumenical movement, represented by the World Council of Churches at the global level, national councils on the national level, and clergy associations on the local level.

(3) There is also THE DENOMINATIONAL LEVEL, which is the 'local church' crowd. While there are exceptions among some old-line Pentecostals, the Charismatic world focuses on experience instead of Biblical doctrine and seeks to unite every sort of denomination. Nobody  lifts a voice against any doctrinal heresy. Many of the most popular Catholic and Charismatic and public religious leaders run this show.

In its necessary substitution of the Holy King James Bible, something called Scholarship Onlyism has developed.  It is the response to the King James Onlyism title given to those who stick with one Bible - that of the Authorized Version of the English Reformation.

The final authority is their own opinion, whoever is making their opinion at the time.

The fruits of Scholarship Onlyism is one hundred percent error, while professing to have the ability to find errors in ALL translations and ALL Greek texts.

A Christian is supposed to have some final authority by which he makes decisions and settles issues.  If it is not the King James Bible, then what would it be?

This ecumenical Scholarship Only bunch offer a pile of lost scattered pieces of paper written in a dead language that no one could not understand unless they attended a school that would teach them what 'they' believe those papers to say, of course, it is just their opinion based on their own personal studies, mind you.

The goal of the Ecumenical bunch is to destroy the belief in Absolute Authority coming from God and putting in its place, the relative authority of man, composed of the preferences and opinions of men who consider themselves fully equipped to be your guide instead of the Holy Bible itself (Hebrews 4:12,13).

Before we dig into the Scholarship Only verses King James Only, let us break up this ecumenical trash, and lets do it without 'our' opinion; let's go straight to the King James Bible - our single and final authority in these matters.

ERRORS OF THE ECUMENICAL MOVEMENT

John 17:21 is often used by ecumenists as a proof text for their objectives, but they fail to point out that Jesus was not instructing Christians to create some sort of ecumenical unity; he was praying for God the Father to create a spiritual unity. The unity Christ prayed for is one based on truth and the Word of God (John 17:6,8,14,17,19; I Corinthians 1:10; I Timothy 6:3-6) whereas the ecumenical movement downplays the importance of truth and doctrine.

(2) The ecumenical movement downplays the local church and exalts
inter-church and inter-denominational relationships.

The so-called Great Commission (Matthew 28; Mark 16; Luke 24; John 20; Acts 1), instructs the churches to preach the Gospel and disciple converts through teaching and preaching of the words of God until the end of the age. (Preach and teach, win from sin) (I Corinthians 1:17-21; II Timothy 2:2)

The Apostles and early churches took this Commission seriously and dedicated themselves EXCLUSIVELY to this task. The nations in which they labored were full of social ills and needs, but there is no hint in the Scripture record that the Apostles gave any attention to remedying such problems. They were dedicated to preaching the Gospel and seeking to win the lost to Christ before it was eternally too late.

To have turned aside for any other task, no matter how seemingly helpful to the community and to humanity in general would have been the gravest disservice to mankind for there is no other institution on earth that can do what the churches are tasked to do. The 'local church' as we knew them in 'yesteryear' will quickly be phased out in America - all in the name of uniting.  America Unites - sounds good, doesn't it?  The 'United States of America'!

As America 'unites' ecumenically, the body of Christ continues to be united spiritually.  Matthew 16:18, "And I say also unto thee, That thou art Peter, and upon this rock I will build my church; and the gates of hell shall not prevail against it."  Psalm 133:1, "Behold, how good and how pleasant it is for brethren to dwell together in unity!  And God provides the ability for us to unite.

They are teaching that women can be pastors and leaders in the churches. In ecumenical circles you often find the same clamoring for "equal rights" as we find in the world. The Bible says the man and woman are not equal in position. They were created for different purposes and different positions in this world (1 Timothy 2:9-15; 5:14; 1 Corinthians 14:34-35; Titus 2:3-5).

(6) Ecumenical groups do not have high moral and doctrinal standards.

Sadly, it is common to find drinking, smoking, cursing, immodest dress, dancing, homosexuality, and various other forms of immorality among ecumenical Christians. The cry of the hour is "liberty" and "self-esteem," and those who call for strict Bible standards of morality are labeled "legalists."

The same attitude was manifest in apostate Israel of old. "Will ye steal, murder, and commit adultery, and swear falsely, and burn incense unto Baal, and walk after other gods whom ye know not; and come and stand before me in this house, which is called by my name, and say, We are delivered to do all these abominations" (Jeremiah 7:9,10). These people thought God had set them free to live as they pleased, and that He would receive their worship regardless of whether or not they obeyed the Holy Scriptures.

Not so! God's indictment against them was severe: "And I will cast you out of my sight..." (Jeremiah 7:15). God hasn't changed! He is still Holy, and He still requires strict obedience to His Word. So, because Jesus Christ walked that strict obedience, we put our trust in Him to make the payment.  As a result, we have a glorious liberty to live and out of love for Him and what our position in Him is, we choose to obey his words. Amen?

The final book of the Bible describes the worldwide religious harlot which will arise in these last days (Revelation 17-18). God's command in regard to this apostasy is "Come out of her, my people, that ye be not partakers of her sins, and that ye receive not of her plagues."

The Beatles can sing “Come Together,”
but the Christians must sing “Come Out of Her!”