Psalm 8:3, “When I consider thy heavens, the work of thy fingers, the moon and the stars, which thou hast ordained.” 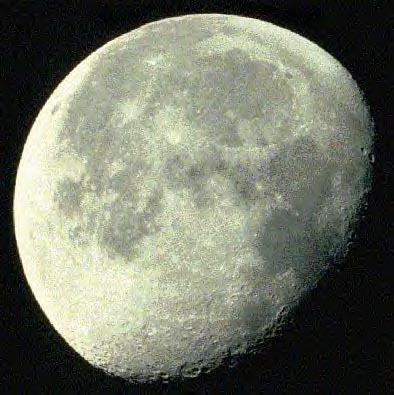 The Bible teaches that the moon and stars are the work of God. Jesus Christ is the divine Creator of the universe and everything therein...

Jesus Christ is the Word of God Who became incarnate (in the flesh). Revelation 19:13 says that Jesus' name is called THE WORD OF GOD. Amen and amen!

National Geographic is a heathen publication, which denies the Bible. Instead, they teach that an asteroid struck the earth billions of years ago and a big piece of the earth broke off, somehow became round, and that's where our moon came from . . .

If you believe that you're a fool sad to say. The moon didn't break off from the earth. The Bible teaches in the book of Genesis that God created the sun, moon and stars . . .

Psalms 94:11, “The LORD knoweth the thoughts of man, that they are vanity.”

Anyone who can look at the round moon and believe that at one time it broke off from the earth, by a massive impact from a speeding renegade asteroid, must be really desperate to believe anything other than the Bible. The moon looks perfectly round. If an steroid crashed into the earth billions of years ago, there wouldn't be anymore earth.

The fact that 95% of the earth's core is composed of molten liquid rock (lava) proves National Geographic magazine and all the so-called scientists who believe the moon/crash theory, WRONG! If an asteroid impacted the earth, nothing would break off because of the liquid molten core. How did the earth end up at just the precise distance from the sun to sustain life on earth? How does the earth maintain a heated mantle (7,000 to 12,000 degrees Fahrenheit) by gravitational accretion (20%) and the decay of radioactive isotopes (80%)? Do you really believe it just happened? God created the earth this way. Hell is inside the earth. Isaiah 14:15, “Yet thou shalt be brought down to hell, to the sides of the pit.”

The moon is mentioned 52 times in the Old Testament, and 10 times in the New. The earth is God's creation and He is pleased with it. Psalms repeatedly teaches that the earth has been established FOREVER by God. We will live here upon the earth with God forever. Psalms 78:69, “And he built his sanctuary like high palaces, like the earth which he hath established for ever.”

The claim by evolutionists, geologists and scientists that the moon formed by breaking off from the earth by a catastrophic event billions of years ago is just REALLY BAD SCIENCE. It's not even plausible when one considers the core content of the earth, nor the characteristics of a high speed impact by an asteroid. 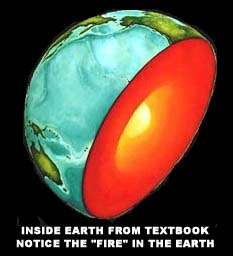 When two humongous elements (one being the earth) collide at 25,000 miles per hour, they completely shatter and disintegrate into pieces. An impact hard enough to break a piece off the earth would totally annihilate everything. And again, the earth's molten core wouldn't cause a clean break, it would be like smashing a watermelon with a sledgehammer!

By all scientific methods of testing, speculating, analyzing and guesstimating; there is no plausible way that an asteroid could have struck the earth, broke off a giant piece, floated 250,000 miles away, fell into a perfect orbit, and then somehow became perfectly round. God is the only logical answer!!!

I know in my heart that it is much more than just the innocent ignorance of bad science; it is the wicked unbelief of God hating men and women. Romans 1:21-22 teaches us that the wicked are ingrates, who do not glorify God in their lives, and they are fools who claim to be wise. Proverb 1:7, “The fear of the LORD is the beginning of knowledge: but fools despise wisdom and instruction.” The reprobate evolutionists, geologists, professors and scientists who write articles for National Geographic, and teach in heathen State universities all across the world; don't fear God. They haven't even found the first step to true knowledge. Romans 3:18, “There is no fear of God before their eyes.” The Word of God teaches that genuine knowledge begins with the fear of God. All true science begins with God, centers around God, and never strays off the fact that God is the omnipotent Creator of all life, and the Maker of the universe in which we live. What a precious Redeemer!!!

If you repeat nonsense often enough for long enough,
it becomes proven fact — It's a proven fact!