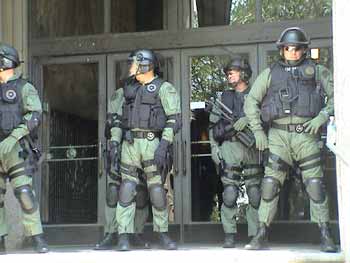 The sixth article of the Bill of Rights: [Amendment IV] The right of the people to be secure in their persons, houses, papers, and effects, against unreasonable searches and seizures, shall not be violated, and no Warrants shall issue, but upon probable cause, supported by Oath or affirmation, and particularly describing the place to be searched, and the persons or things to be seized.

Skip ahead to the New America, in the age of Homeland Security. The American government, always on the lookout for easy money, is using the Drug Enforcement Administration, FBI, state and local police to seize the luggage, cash and cars of innocent American's. Under America's new civil forfeiture laws, mere possession of a large amount of cash or a drug dog barking at your luggage is sufficient probable cause for police to legally seize everything you are carrying. In Albuquerque, N.M., in February, DEA agents detained Sam Thach, who was traveling on Amtrak from Fullerton, Calif., to Boston, and seized $147,000 in cash he was carrying. Thach had no drugs. His crime? He had bought a one-way ticket with cash and didn't give Amtrak his phone number.

The DEA seized $640,000 from Jennifer Leigh Ames while she was traveling on Amtrak in April. Agents say she looked nervous and had refused permission to search her luggage.

At Houston’s Hobby Airport, police stopped 49-year-old Ethel Hylton and seized her luggage because a drug dog had scratched it. Agents searched her bags and strip-searched her but found no drugs. They did find $39,110 in cash from an insurance settlement and her life savings, accumulated through over 20 years of work as a hotel housekeeper and hospital janitor. Ms. Hylton completely documented where she had gotten the money and was never charged with a crime. But the police kept her money anyway. Destitute, she had no way to fight them.

These outrageous seizures are completely legal and have been upheld by the highest courts in the land, including the U.S. Supreme Court. The DEA's Web site claims, "Property is seized by the DEA only when it is determined to be a tool for, or the proceeds of, illegal activities such as drug trafficking, organized crime, or money laundering." But the above examples show the reality. Under civil asset forfeiture, your property – not you – is charged with a crime. 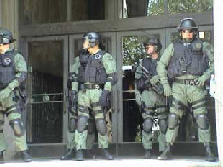 Once your property is charged with a crime, it can be seized and kept by police, even if you are never convicted of anything. An appeals court in Florida even ruled that police can personally receive bounties of 25 percent of the value of anything they seize from you, such as your car, bank accounts or home. There are now more than 400 federal offenses and thousands of state and local offenses for which your cash, car, bank accounts and home can be seized – including shoplifting, hiring an illegal alien such as a maid (California), playing a car stereo too loud (New York), transporting illegal fireworks, gambling, having illegal drugs on your property, and merely discussing violating any law ("conspiracy”), such as underpaying your taxes.

More than $1 billion in property is now seized without trial each year from innocent Americans, according to the national forfeiture defense organization FEAR (Forfeiture Endangers American Rights). Seizures range from the pocket cash of poor street people to the cars of men accused of soliciting prostitutes to multimillion-dollar apartment buildings. Once police seize your property, the burden of proof is on you to prove your property’s innocence. Any suspected illegal actions of your relatives, guests, friends and employees on or even near your property are sufficient grounds to seize it.

In Montgomery, Ala., police seized the home of 69-year-old Gussie Mae Gantt after videotaping police informants buying drugs in her yard. Ms. Gantt had previously called the police, complaining about drug dealing in her neighborhood, and had posted no-trespassing signs, but the drug dealers ignored them. Police waited until there was a drug deal in her yard and then seized her home.

Once your home, car or bank accounts are seized under civil asset forfeiture laws, you can pretty much forget about ever getting them back. It's you versus the police and courts, who divide up the proceeds from your property according to formulas such as "80 percent for police, 20 percent for the court." If you want to fight seizure of your property, expect to spend at least $15,000 just to hire a competent asset defense attorney. Also expect the police to introduce hearsay evidence and to go through trial after trial, because the normal constitutional protections afforded criminal suspects don't apply to civil forfeiture of your property.

With all of this easy confiscated money, asset confiscation is now big business across America. In Volusia County, Fla., police seized more than $8 million worth of cars from motorists stopped for minor traffic violations along Interstate 95. In Alameda County, Calif., police auction off hundreds of seized cars and boats every month.

The latest wrinkle in civil asset forfeiture is police working with Amtrak, Greyhound, airlines and hotels to seize cash from travelers. The Albuquerque Journal reports that Amtrak gave the Drug Enforcement Administration access to its booking system in exchange for 10 percent of any monies seized by police. The DEA has similar deals with airlines at major airports and many hotel and motel owners in Los Angeles, Las Vegas and other large cities. DEA agents are now permanently stationed at major airports and hotels.

So kiss your Constitution goodbye America. It's been a joke for a long time now, and the joke is on us. If a nation of people just sit by and allow their own government to tyrannize them, and their fellow citizens, without so much as a whimper of protest, then don’t be surprised if one fine day, you get what you deserve. When is it the right time to say, Enough, no more. On this spot I stand, and fight?

The Creature from Jekyll Island: A Lecture on the Federal Reserve (download: Real Audio | MP3)
"G. Edward Griffin exposes the most blatant scam of all history. It’s all here: the cause of wars, boom-bust cycles, inflation, depression, prosperity. It's just exactly what every American needs to know about the power of the central bank."

Evils of the Federal Reserve