"Neither be ye idolaters, as were some of them; as it is written, The people sat down to eat and drink, and rose up to play ... Ye cannot drink the cup of the Lord, and the cup of devils: ye cannot be partakers of the Lord's table, and of the table of devils." —1st Corinthians 10:7,21

Mardi Gras is one of the most despicable and sinful celebrations in the world! Although originally began as a religious holiday (holy-day), it's one of the most pagan celebrations existing today. Droves of lesbians, whoremongers, and Sodomites creep into New Orleans every February to participate in this apostate godless event. Woe unto New Orleans!  Woe unto Las Vegas! Woe unto America! God's longsuffering will not hold out forever. Judgment day is coming!

Mardi Gras means "Fat Tuesday" and of course is celebrated on that day of the week. The date can fall between February 3 and March 9 depending on the Catholic Church.  Mardi Gras is always 47 days before Easter Sunday.

The official colors for Mardi Gras are purple, green, gold. These colors where chosen in 1872 by the King of Carnival, Rex. He chose these colors to stand for the following:

The Mardi Gras season begins about two weeks before Fat Tuesday. During those two weeks, parades can be viewed nightly and on weekends.

Almost all businesses are closed for Lundi Gras (Fat Monday) and for Mardi Gras itself. People all over the world come to New Orleans to enjoy this extravagant holiday.

Homosexuality and Fornication Bring the Judgment of God!

Homosexuality and Fornication are horrible sins, which brought God's wrath and destruction upon the cities of Sodom and Gomorrah in the Old Testament! The Word of God teaches that Sodom and Gomorrah were destroyed by fire and brimstone as an EXAMPLE for people TODAY.

Jude 1:7 states, "Even as Sodom and Gomorrha, and the cities about them in like manner, giving themselves over to fornication, and going after strange flesh, are set forth for an example, suffering the vengeance of eternal fire."

As the saying goes, "A picture is worth a thousand words." Why do you think homosexuals HATE and LOATH the term "Sodomite"? They hate it so much that New International Version committee members, Virginia Mollenkott and Marten H. Woudstra, removed the word "sodomite" completely from the Word of God. Look in any NIV bible today and you won't find the word "sodomite."

Do you know why? Jude 1:7 gives is the reason—because Sodom was destroyed as an EXAMPLE of what WILL happen to the wicked when they burn in Hell. God doesn't want anyone to go to Hell; but it is the choice of each individual to accept or reject Jesus Christ as their Savor. We read in 2nd Peter 3:9, "The Lord is not slack concerning his promise, as some men count slackness; but is longsuffering to us-ward, not willing that any should perish, but that all should come to repentance."

Jesus said in John 5:40, "And ye will not come to me, that ye might have life." Jesus didn't say "ye cannot come." No, Jesus said "ye will not come."  The decision is yours alone to make... "But as many as received him, to them gave he power to become the sons of God, even to them that believe on his name" (John 1:12).

If you go to a Mardi Gras festival, you WILL see complete nudity and homosexuality. You will encounter drunkards everywhere, and random fights breaking out. Some people even die. Jesus said He came to heal the sick (Matthew 9:12), and Mardi Gras festivals are some of the sickest places on earth.

There is a Raging Demonic spirit Behind Mardi Gras!

Mardi Gras promoters want you to see the friendly parades and the delicious food; but, the Devil always pays with counterfeit money! There's a raging demonic spirit behind the Mardi Gras celebrations. NO professed Christian should ever go to any Mardi Gras festival. The sick debauchery of Mardi Gras has spread all across America like cancer. Here's what goes on at Mardi Gras ...

"Picture this ugliness. Two dozen young men are crowded around a woman who has been pushed flat on a slab. Five men are fondling her breasts. Four others are at her crotch. Two more are pulling off her pants. Another grips her right elbow. Most of the men are smiling. The woman appears dazed. Her left arm flails about. The woman, shown in a series of images captured by a Seattle Post-Intelligencer photographer on Fat Tuesday, fights to get up. Several men pin her down. At one point, there are 19 hands -- white, black, Asian, Hispanic -- on her body.

Or how about this one: A woman on a friend's shoulders is trying to get down. Men grab her from behind, grope her chest and knock her to the ground, where a half-dozen men jump on her and pull her clothes off.

That scene played out several times during the night as video cameras rolled. The tapes and the photographs show reprehensible, infuriating conduct. Were these men having fun? Did those who witnessed the assaults feel any responsibility to report the crimes? I keep wondering what their parents would think if only they knew.

SOURCE (THE SEATTLE POST-INTELLIGENCER, Why Did Crowds Tolerate Sex Assaults?)

NEW ORLEANS (AP) — A woman who bared her breasts at Mardi Gras and got worldwide exposure has sued the producers of the ``Girls Gone Wild'' videos, claiming they invaded her privacy and used her image without permission.

Becky Lynn Gritzke, a Florida State University business major, admits in her lawsuit that she was among the women who removed their tops at Mardi Gras last year in exchange for beads and trinkets.

A month later, Gritzke said, she was surprised to find out that she not only appeared in the video series featuring women baring their bodies, but was also seen in the TV ad and Web site.

Ronald E. Guttman, an attorney for MRA Holdings LLC, the video's producers, said there is no privacy protection for people who take their clothes off in public, especially at a big public event where many people have cameras.

Guttman has asked a Florida court to dismiss the lawsuit, which was filed in September.

These immoral God-haters go to places like Mardi Gras to film women taking their clothes off, so they can sell the video's and make millions of dollars.  Mardi Gras has become synonymous with nakedness, lots of alcohol, and fornication.  This is how EVIL Mardi Gras is.

Mardi Gras is Catholicism at it's Best!

"...and the people sat down to eat and to drink, and rose up to play ... they have made them a molten calf, and have worshipped it, and have sacrificed thereunto ... And it came to pass, as soon as he came nigh unto the camp, that he saw the calf, and the dancing: and Moses' anger waxed hot ... Moses saw that the people were naked" -Exodus 32:6,8,19,25.

New Orleans' Mardi Gras has become synonymous with drunkenness, nudity, homosexuality, pornography, idolatry, and every other form of sin imaginable. They even display a Golden Cafe for people to adore and worship ...

"What we have today is a churchy world and a worldly church!!!  In French, Mardi Gras means Fat Tuesday. This is  a day to gorge and over indulge oneself before the seasonal religious practice of fasting, abstinence and denial. It is not surprising that the symbol for Mardi Gras is the "Bouef Gras"... The fatten bull

The bull is the Old Testament symbol of Baal. 1st Kings 12:28,19:18; Exodus 32.  Baal the bull is symbolic of strength and fertility. God condemns the production and worship of idols. Yet many in the church do just that, worship idols.

Exodus 23:13, "And in all things that I have said unto you be circumspect: and make no mention of the name of other gods, neither let it be heard out of thy mouth."

Steeped in Egyptian, Grecian, and Roman fertility rites. Half of the parades celebrate and honor false gods. The rest promote sex and drunkenness." 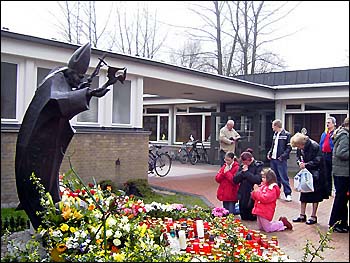 To no surprise, Mardi Gras is a Catholic holiday, with Lent following the sinful celebration. I've known many Catholics in my life, and I've yet to meet one who wasn't a total heathen. I worked with a Filipino man, a Catholic, who would pray the Rosary at work each day, and then take out a Playboy Magazine afterwards. I don't condemn him, for I am a sinner like anybody else; but something is wrong with a religious man who has no shame in pornography.

The reason is because the Catholic religion is a fraud. From the cradle-to-the-casket, Roman Catholicism has a religious package for you. They'll baptize your infants, bury your dead, and send you straight to Hell when you die. Jesus plainly warned in the Bible about false religions which teach the traditions of men instead of obeying the Commandments of God (mark 7:6-13). Romans 10:3-4 also warns against those who go about to establish their own righteousness, instead of submitting to the righteousness of God which is found only by faith in Jesus Christ (Galatians 3:26). Religion wants to fit you with glasses, but the Lord wants to open your eyes with the truth. Jesus said that he came into the world to bare witness of the truth (John 18:37).

This sums up Catholicism—religion without truth, churchianity without Christianity, salvation without Jesus Christ. Catholicism is straight out of the pits of Hell. Billions of lost sinners will someday burn in Hell, as many are now, because they trusted in men's traditions instead of upon the Word of God. Jesus warned in Mark 7:7-9, "Howbeit in vain do they worship me, teaching for doctrines the commandments of men. For laying aside the commandment of God, ye hold the tradition of men... Full well ye reject the commandment of God, that ye may keep your own tradition." Oh how foolish are the followers of Catholicism, who have allowed themselves to be defiled by the Mother of Harlots (Revelation 17:5).

Apostate Minster says, “I'd like to go to Mardi Gras Someday”

I couldn't believe my ears when I heard a pastor say to me, "I'd like to go to Mardi Gras in New Orleans someday." He ought to fall on his knees and beg God for forgiveness. Talk about a neo-evangelical deadbeat! Why would any professed believer want to go to a Mardi Gras festival unless your deliberately wanting to live in sin? That's as bad as lot.  Remember, Lot (Abraham's nephew) initially didn't intend on moving into Sodom to live—he simply pitched his tent toward Sodom, "...and Lot dwelled in the cities of the plain, and pitched his tent toward Sodom" (Genesis 13:12). "Pitched" means that Lot deliberately faced the opening of his tent towards Sodom; thus, Lot's sinful heart was already in Sodom.

What Happens In Vegas, Is RECORDED In Heaven!!!

Sodom and Gomorrah
Woe Unto America! | Evils in America