The following statistics are sad and shocking. It's a shame that so many children today sit glued in front of the TV tube, being brainwashed by all sorts of demonic influences. American television has become a menace!

I remember as a child often playing board games with my mom—games like Chutes-and Ladders, Mouse Trap, Husker Du and Candy Land. I'm glad I have those fond memories of childhood. Kids nowadays are losing out.
We've lost something precious in America—quality family time! Whereas the dinner table used to be the highlight of each day, when a family would gather around and enjoy a homecooked mouthwatering meal, families today eat microwaved TV-dinners while sitting around watching dirty-minded, violent, sexually suggestive, sicko TV.
END
Television Statistics
According to the A.C. Nielsen Co., the average American watches more than 4 hours of TV each day (or 28 hours/week, or 2 months of nonstop TV-watching per year). In a 65-year life, that person will have spent 9 years glued to the tube.
I. FAMILY LIFE

For decades, research and studies have demonstrated that heavy television-viewing may lead to serious health consequences. Now the American medical community, which has long-voiced its concerns about the nation's epidemic of violence, TV addiction and the passive, sedentary nature of TV-watching, is taking a more activist stance, demonstrated by its endorsement of National TV-Turnoff Week.
The average child will watch 8,000 murders on TV before finishing elementary school. By age eighteen, the average American has seen 200,000 acts of violence on TV, including 40,000 murders. At a meeting in Nashville, TN last July, Dr. John Nelson of the American Medical Association (an endorser of National TV-Turnoff Week) said that if 2,888 out of 3,000 studies show that TV violence is a casual factor in real-life mayhem, "it's a public health problem." The American Psychiatric Association addressed this problem in its endorsement of National TV-Turnoff Week, stating, "We have had a long-standing concern with the impact of television on behavior, especially among children."
Millions of Americans are so hooked on television that they fit the criteria for substance abuse as defined in the official psychiatric manual, according to Rutgers University psychologist and TV-Free America board member Robert Kubey. Heavy TV viewers exhibit five dependency symptoms--two more than necessary to arrive at a clinical diagnosis of substance abuse. These include: 1) using TV as a sedative; 2) indiscriminate viewing; 3) feeling loss of control while viewing; 4) feeling angry with oneself for watching too much; 5) inability to stop watching; and 6) feeling miserable when kept from watching.
Violence and addiction are not the only TV-related health problems. A National Health and Nutrition Examination Survey released in October 1995 found 4.7 million children between the ages of 6-17 (11% of this age group) to be severely overweight, more than twice the rate during the 1960's. The main culprits: inactivity (these same children average more than 22 hours of television-viewing a week) and a high-calorie diet. A 1991 study showed that there were an average of 200 junk food ads in four hours of children's Saturday morning cartoons.
According to William H. Deitz, pediatrician and prominent obesity expert at Tufts University School of Medicine, "The easiest way to reduce inactivity is to turn off the TV set. Almost anything else uses more energy than watching TV."
Children are not the only Americans suffering from weight problems; one-third of American adults are overweight. According to an American Journal of Public Health study, an adult who watches three hours of TV a day is far more likely to be obese than an adult who watches less than one hour.
Sometimes the problem is not too much weight; it's too little. Seventy-five percent of American women believe they are too fat, an image problem that often leads to bulimia or anorexia. Sound strange? Not when one takes into account that female models and actresses are twenty-three percent thinner than the average woman and thinner than ninety-five percent of the female population.

In sharp contrast to America's denial concerning the dangers of unwholesome TV, China's broadcasting watchdog has banned all sexually suggestive advertising on radio and television. That's exactly what we need here in America! Freedom of speech doesn't give anyone the right to exploit, corrupt or seduce the public.

The United States has some of the lowest standards of ethics in the world when it comes to television content. Our nation is crumbling apart morally. If China, a Communist nation, has enough sense to realize that commercials featuring sexually suggestive language or behaviour or featuring scantly dressed women are “detrimental to society,” then what is wrong with America that we are so blind to the truth? ...

China's broadcasting watchdog has banned all sexually suggestive advertising on radio and television. Commercials featuring sexually suggestive language or behaviour or featuring scantly dressed women were “detrimental to society,” the State Administration of Radio, Film and Television (SARFT) said in a circular on Tuesday.

All stations are prohibited from broadcasting commercials and programs involving drugs, sex-related health supplements, drugs for sexually transmitted diseases, sex toys, as well as "vulgar" ads for breast enhancement and female underwear, according to the circular.

Commercials in which celebrities testify to the effects of products are also banned, reports Xinhua. The SARFT also ordered an end to programs with names including sex-related drugs, products or medical institutions.

“Sexually suggestive ads and bad ads not only mislead consumers seriously and harm public health, but are socially corrupting and morally depraving, and directly discredit the radio and TV industry,” the circular said. In July this year, the SARFT released a notice to stop ads with inappropriate content or sex implications from appearing on TV screens.

A total of 1,466 ads involving two billion Yuan (US$267 million) have been removed since August, statistics from the SARFT showed. The administration warned stations that failed to monitor the quality of commercials and programs would face severe penalties. Since September 5, China's broadcasting watchdog has punished ten radio stations for talk shows involving sexual topics.

Here's another article on the subject...

The Chinese government has banned "sexually provocative sounds" on television and pulled the plug on a show recreating infamous crimes by women ahead of a major Communist Party meeting next month.

The order, issued by the State Administration of Radio, Film and Television, is the latest in a series of ordinances, which have included shutting down reality shows featuring sex changes and plastic surgery and banning talent contests during prime-time.

"Sexually suggestive advertisements and scenes showing how women are influenced into a life of crime are detrimental to society," The SARFT said in a statement posted on its Web site on Wednesday, referring to its decision to axe "Red Question Mark", a crime documentary.

"Commercials containing sexually provocative sounds or tantalizing language as well as vulgar advertisements for breast enhancement and female underwear are banned, effective immediately," the SARFT notice added. The watchdog also ordered an end to programs with titles including the names of "sex-related drugs, products or medical institutions".

A total of 1,466 advertisements worth 2 billion yuan (132 million pounds) in revenues had been stripped from China's airways since August, SARFT noted, citing department statistics. 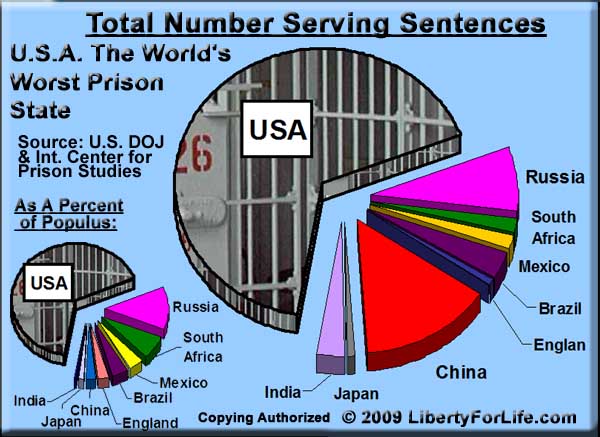 Land of the free? I think not.

These two groups comprised more than 20% of the total viewing audience.

A picture is truly worth a thousand words.

Pawns in the Game

Sex and Violence on TV