Revelation 17:10-11, “And there are seven kings: five are fallen, and one is, and the other is not yet come; and when he cometh, he must continue a short space. And the beast that was, and is not, even he is the eighth, and is of the seven, and goeth into perdition.”

The Bible speaks of 8 kings. At the time Revelation 17:10-11 was written, 5 kings had come and gone, one was in power, and 2 were yet to come in the future. This is a fascinating teaching in the Word of God, and an important key to understanding Biblical prophecy. The following Old Testament passage if Scripture explains Nebuchadnezzar's image (which he saw in a dream from God) to the right...

Daniel 2:31-35, “Thou, O king, sawest, and behold a great image. This great image, whose brightness was excellent, stood before thee; and the form thereof was terrible. This image's head was of fine gold, his breast and his arms of silver, his belly and his thighs of brass, Thou sawest till that a stone was cut out without hands, which smote the image upon his feet that were of iron and clay, and brake them to pieces. Then was the iron, the clay, the brass, the silver, and the gold, broken to pieces together, and became like the chaff of the summer threshingfloors; and the wind carried them away, that no place was found for them: and the stone that smote the image became a great mountain, and filled the whole earth.”

The kings are world powers throughout history. At present, there have been 6 world powers. These are (in chronological order): Egypt, Assyria, Babylon, Medo-Persia, Greece and Rome. The 7th king will be world government (aka, the New World Order). The man of sin, the Antichrist, is the 8th and final king and will arise FROM the 7th kingdom. The “stone” cut out of the mountain without hands will be the Second Coming of the precious Lord Jesus Christ in power, preeminence and prophetic fulfillment. Even so, come, Lord Jesus!

We see these different world powers mentioned throughout the Scriptures...

Studying the Scriptures, with these different corresponding and reigning secular world powers in view, opens a whole new understanding to the Word of God concerning history and Biblical prophecy. No other book in existence has this unique feature, that is, spanning thousands of years and prophetic in nature. The Bible is composed of 31% prophecy! Who can argue the divine nature of the Word of God!!!

Rome fell in 486 A.D. and there has been no world power since. The United States, China and Russia are super powers, but there have been no WORLD powers controlling the entire world since the Roman empire. No one country dominates the world today. This is represented by the mixed toes of clay and iron in Nebuchadnezzar's image, that is, freedom co-existing worldwide with Communist tyranny. North Korea is a total monstrous dictatorship in 2013, but thankfully, most other nations are considered free.

Please note that the 7th empire will NOT be the revived Roman empire. The Bible never says that the Roman empire will be restored. Many theologians reasonably thought in centuries past that the oppressive reign of the Roman Catholic religion identified Catholicism as the coming Beast system of the Antichrist. I would have errantly thought the same thing in view of the murderous atrocities committed by the Roman Church for over a millennium of history. However, we are privileged today to have a much clearer understanding of secret societies, the Illuminati's history and the New World Order in general.

Thousands of secular and religious books have been authored on the subject, most authors obscure and unknown. Consider this very interesting book authored in 1919 by Samuel Z. Batten, titled THE NEW WORLD ORDER (.pdf file). Thus, we understand today in 2013 that “The Great Whore” of Revelation is very likely the Illuminati (the “synagogue of Satan,” Revelation 2:9 and 3:9) who have fornicated with the kings of the earth. Revelation 18:3, “For all nations have drunk of the wine of the wrath of her fornication, and the kings of the earth have committed fornication with her, and the merchants of the earth are waxed rich through the abundance of her delicacies.” Revelation 19:2, “For true and righteous are his judgments: for he hath judged the great whore, which did corrupt the earth with her fornication, and hath avenged the blood of his servants at her hand.” The Catholic Pope in my opinion will be the False Prophet. The Antichrist will be of Jewish origin.

The 7th king will be the New World Order. The 8th king will be the Antichrist (Revelation 17:11). We see this monstrosity forming before our very eyes today. Satan Worship For The Masses: Baal Temple In New York To Be A 'Gesture Of Defiance' Against God (the ultimate “extremist”). There has been much talk in the mainstream newsmedia about the New World Order. Paul Warburg made this telling prediction back in 1950 before the U.S. Senate . . .

Here are the words of Illuminist, David Rockefeller, from 1991 at a Bilderberg meeting . . .

"We are grateful to the Washington Post, The New York Times, Time Magazine and other great publications whose directors have attended our meetings and respected their promises of discretion for almost forty years."

"It would have been impossible for us to develop our plan for the world if we had been subjected to the lights of publicity during those years. But, the world is now more sophisticated and prepared to march towards a world government. The supranational sovereignty of an intellectual elite and world bankers is surely preferable to the national auto-determination practiced in past centuries."

The 8th king will be a man, the Antichrist, who will be of the 7th world power according to Revelation 17:11, i.e., he will be a part of the New World Order, rising to power from it. Check out the occult imagery in Jimmy Buffet and Toby Keith's latest horrible song, “TOO DRUNK TO KARAOKE.” The image of SANTA (SATAN) looking down upon The Great Pyramid teaches us what the All Seeing Eye truly represents. 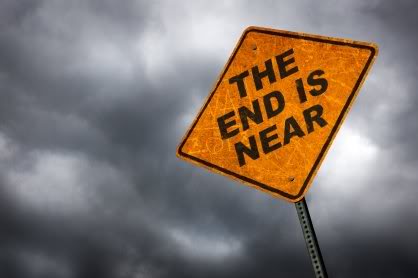 I believe that Revelation chapter 18 speaks concerning the total economic destruction of the United States. At present there are 35,000,000 Americans receiving government Food Stamps (the number is 46,600,000 as of September 2012[1]). The unemployment rate is at 16% nationwide. Tens-of-millions of U.S. citizens have lost their homes.

The Obama administration is calling this a “jobless recovery.” What an insult! The jobs aren't coming back, because there are no jobs to come back... they've all been outsourced to foreign slave labor! Americans are actually being forced to compete with illegal immigrants for what jobs remain, because of the high treason of our officials in Washington D.C. Americans are going to be MUCH poorer in the very near future. Our dollar is on the verge of total collapse. America's economy will collapse in one hour (Revelation 18:10,17,19).

Oh, friend, we are living in the Last Days. I am not setting any dates for the Lord's return, but the New World Order is the Beast System of the Antichrist, and it's forming right before our eyes. Truly, the Lord's return is imminent.

Are you ready to enter into eternity? Do you have Christ's righteousness, which is solely by faith in Jesus? Salvation happens when a person acknowledges their guilt of sin (Romans 3:19), and comes to God on the basis that they are a hell-deserving sinner; believing on Jesus, the Christ, the Son of God, for forgiveness of sins (Acts 10:43). In response to our faith, God the Father imputes (attributes) the righteousness of His dear Son to our record in Heaven (Romans 4:6). When God views us from that moment forward, He sees the righteousness of Christ instead of our sins. Thus, we are made clean by the precious blood of Jesus Christ, which takes our sins away forever (Revelation 1:5). Praise God!

Jesus said that men would not know the exact day nor hour when He would return, but Jesus didn't say that we couldn't know the times. The handwriting is all over the wall. Granted, throughout history people have errantly thought that the end was near; such as in 1844 when Seventh Day Adventism was born out of a failed prophecy for Christ to return. The difference is that I am not setting any dates. I do not know when Christ will return. Yet, only a fool would deny that the world is headed for World Government. This is the 7th kingdom in Revelation 17:10-11. The 8th will be the Antichrist, whom the Bible says will arise from the 7th kingdom. Signs of Satan are everywhere. 666 is everywhere.

One thing is certain, this world is getting ugly. Apostasy is everywhere. Corrupt Bibles are everywhere. Entertainment has replaced singing gospel hymns in our churches. Psychology has replaced Bible-preaching. Women preachers are epidemic, all corrupt in their theology, all rebelling against God just as the feminists and lesbians. God has ordained it to be masculine authority in the home, marriage and church. Anything else is apostasy. Women don't belong in the pulpit, nor any position which usurps authority over a man. Women are to keep silent in the church, having a meek and quite spirit as the Bible commands (1st Peter 3:4).

Perverted gender-equality Bibles, women preachers and the homosexualization of society are paving the way for a Police State. This is because rebellion amongst women has ruined our children and country. Everything rests upon mothers. Eve led Adam into sin. Without godly mothers there will be no godly preachers in the next generation. Women are not to blame more than men for sin, but my point is that when Satan wants to destroy a society, he goes after the woman. If Satan can get the woman, then he has the children and the men will follow. The evil monster-holes behind the New World Order know this, which is why they went after Brother Lester Roloff with everything they had to shut him down. Brother Roloff was turning out a generation of godly mothers, the Devil's biggest fear.

The 8 kings of Revelation are a telling indicator of where we are at in history's time line. So far, 6 kings have fallen, and the 7th is now coming to power, which will give ascendancy to the Antichrist himself. The Bible teaches that the Rapture (i.e., being “caught up” — 1st Thessalonians 4:17) will precede the Tribulation Period, which means that the Church must be removed from the world before the Antichrist appears. So I say to you all... the trumpet is out of the case!