2nd Timothy 3:16, “All scripture is given by inspiration of God, and is profitable for doctrine, for reproof, for correction, for instruction in righteousness.” 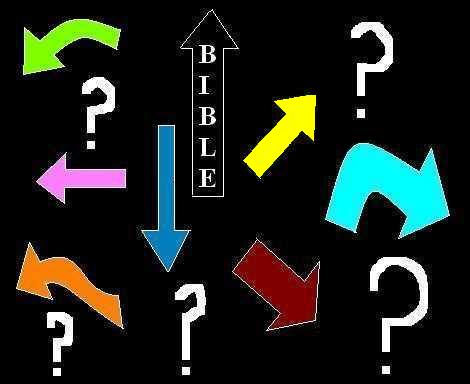 The phrase Sola Scriptura is from the Latin: sola meaning “alone,” “ground” or “base.” The word Scriptura meaning “writings,” which refers to the Scriptures.

Thus, Sola Scriptura means that the Scriptures alone are the believer's Final Authority.

Most people today, including churchgoers, reject the Bible as the Final Authority in their life. A poll showed that only 7% Percent of U.S. Adults are Bible Believers.

Tony Jones is the coordinator of The Emergent Village, an apostate religious group, who openly supports homosexuality. Jones stated in 2009, “I now believe that the GLBTQ [Gay, Lesbian, Bi-sexual, Transgendered, Queer] can live lives in accord with Biblical Christianity, at least as much as any of us can, and that their monogamy can and should be sanctioned and blessed by Church and State.” This is the pastor of a church in America saying this!

The Emergent Church cult is sweeping America. In February of 2009, at a National Pastor's Conference in San Diego, sponsored by Zondervan and Intervarsity Press, featured speaker Brian McLaren said:

“The age of Sola Scriptura is over.”

McLaren also denies the Second Coming of Jesus Christ. As the featured speaker at last year's Willow Creek Youth Conference, called The Shift, McLaren said, “The emphasis on traditional Christian doctrines like Hell and the Second Coming of Christ need to change.” Talk about apostasy! These men are unsaved Modernists, masquerading as Gospel ministers. They are Satan's ministers (2nd Corinthians 11:13-15).

No wonder Jesus said in Luke 18:8, “I tell you that he will avenge them speedily. Nevertheless when the Son of man cometh, shall he find faith on the earth?” The implied answer is NO.

A lot of people have been woefully misled by Rick Warren's, The Purpose Driven Life. Rick Warren preaches a lame false Gospel of simply giving one's life to Christ. Judas gave his life to Christ, being one of Jesus' very Apostles, but still went to Hell in unbelief. Warren is a servant of the New World Order. In order to dupe the last remaining bastion of truth in the world, America, the occult led Illuminati are using their sinister ministers to corrupt the doctrine of Christ.

We are living in an evil generation of trendy compromised Christianity that condones abortion and embraces homosexuality. It is apostasy! These evil false prophets are more interested in pleasing and appeasing the media and proud defiant sinners, than in obeying God.

If the Bible is all you have, the Bible is all you need. Christians are so sidetracked with so-called “Christian” books, magazines, music, seminars, et cetera... that they don't have time to read the Bible anymore. They've been inoculated from Christianity. The very materials allegedly intended to help people spiritually are actually keeping them away from God. Go figure! This is on purpose. Satan dwells in the Church (Revelation 2:13). This is where the Devil can do the most damage. Christian men have sold-out for money. When a pastor starts teaching that the King James Bible is no longer inspired, and the men in the church back him up, they are sold-out. Truly, the love of money (and the things money can buy) are the root of all evil (1st Timothy 6:10). The King James Bible is preserved, inerrant and INSPIRED!

Sola Scriptura is just a fancy theological word, which means that the Bible is the Final Authority (and it is!). Men may reject the Bible and make their own authority; but God's Law still stands. Abortion is still considered cold-blooded murder with God, and the blood of 50,000,000 innocent humans cry out to God from the grave (Genesis 4:10). Whereas terrorists have killed 3,000 Americans since 1990; abortionists have killed 4,000 Americans since yesterday! Those evil terrorists!

Homosexuality is still an abomination (i.e., something disgusting to God); regardless of what wicked courts may rule. God's Law supercedes man's law. The “age of Sola Scriptura,” as Brian McLaren terms it, is never over. God's Word will always be the Final Word. What other authority is there? The only 3 authorities are God, Satan and men. Men either embrace Satan's authority or God's authority.

Member's of the occult group, Bohemian Grove, embrace Satan's authority, which is why they beseech the demonic god of Bohemia every July, at a privately owned campground just north of San Francisco. They worship a 40-foot owl. Nearly all of America's top leaders are members. These are the men who baby-sit the big red button! They reject the Bible and are perpetrators of the New World Order. 2nd Timothy 3:16, “All Scripture is given by inspiration of God, and is profitable for doctrine, for reproof, for correction, for instruction in righteousness.” How could any so-called minister teach that the Bible is not Sola Scriptura, when the Bible itself proclaims to be the Final Authority in all matters.

Please don't be deceived, the Bible is the Word of God, the Final Authority in all matters, Sola Scriptura.