I’d Rather Be a Doorkeeper
By David J. Stewart
“I had rather be a doorkeeper in the house of my God, than to dwell in the tents of wickedness.” –Psalm 84:10

What a statement! David said he’d rather be a doorkeeper in the house of God; than to reside in the place of the wicked. My sentiments exactly!

Although a person does NOT have to forsake sins as a prerequisite to be saved (Romans 4:5); God does expect each born-again believer to depart from sin because they are saved… “Nevertheless the foundation of God standeth sure, having this seal, The Lord knoweth them that are his. And, Let every one that nameth the name of Christ depart from iniquity” (2nd Timothy 2:19). No Christian has God’s permission or blessing to commit sin (2nd Corinthians 5:10).

1st Timothy 6:10 confirms that the love of money is the ROOT OF ALL EVIL. As Christian believers, money should not be an issue. I am sickened that so many ministries today are centered upon money. This is apostasy. The average church today is willing to compromise their convictions for money’s sake. This is why so many pastor's avoid controversial subjects like drinking beer, abortion, 911, and homosexuality. I’m sick of money-hungry ministries which serve themselves better than anyone else. When a minister focuses upon money more than anything else, and continually hounds his congregation for money, it is evidence that he has his priorities wrong. Sadly, most professed “Christians” are willing to dip-their-sail in compromise for money. Greed and covetousness have spiritually destroyed more churches, marriages and friendships than perhaps any other sins.

David loathed the way of the wicked, as every believer ought to… “Ye that love the Lord, hate evil…” (Psalm 97:10).  I’d rather dig graves for a living than work in a Las Vegas casino. I’d rather be a doorkeeper in the house of God, than to dwell in the presence of the wicked.

John the Baptist, Lot and Joshua

In Genesis 13:12 we read that Lot "pitched his tent toward Sodom." By the very next chapter, in Genesis 14:12, we read that Lot "dwelt in Sodom." Lot's heart was in Sodom long before he decided to move there. Sodom was a wicked city filled with... "pride, fulness of bread, and abundance of idleness was in her and in her daughters, neither did she strengthen the hand of the poor and needy" (Ezekiel 16:49). Sodom was saturated with fornicators and homosexuals (Genesis 19:1-11; Jude 1:7). In short, Sodom was a cesspool of iniquity. Why would any believer want to live in an environment of such wickedness? Lot chose to dwell in the tents of the wicked.

Joshua said... "And if it seem evil unto you to serve the LORD, choose you this day whom ye will serve; whether the gods which your fathers served that were on the other side of the flood, or the gods of the Amorites, in whose land ye dwell: but as for me and my house, we will serve the LORD" (Joshua 24:15). Joshua chose to be a doorkeeper in the house of God.

From Church to the Nightclub in Jesus' Name

Miley Cyrus (aka Hannah Montana) admits that she abandoned a "great church" to move to Hollywood. According to ChristianityToday magazine...

He [Billy Ray Cyrus] adds, "We also had a great church, and when you give up your church, your pastor, and the community you are involved in, you're making a big sacrifice. Let's face it, Hollywood is a completely different environment than Franklin, Tennessee." ... By all accounts, Miley is a level-headed young lady. Her parents work hard to keep their daughter's life as normal as possible.

So the Cyrus family left their "great church" to move to the vile filth of Hollywood, and where is Miley now in February of 2008... 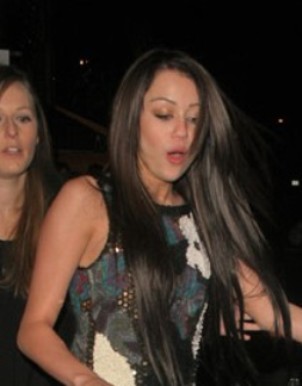 Last Thursday night, Best of Both Worlds baller Miley Cyrus was spotted straddling the curb leaving Club Social in Hollywood. Are her high heels just getting stuck in the grass, or do you think she had a few too many vodka and tonics in the club filled with much older, attractive men?

From what we've seen with Lindsay Lohan and other fallen starlets, it's obvious that celebrities can drink at any age in Hollywood. Do you think Miley is already getting tipsy?

Oh listen my friend—the Devil always takes you farther than you wanted to go, keeps you longer than you planned to stay, and costs you more than you intended to pay.  The Devil is a liar (John 8:44).  The Devil comes only to kill, steal and destroy (John 10:10).  You can't eat at the Devil's table without getting food-poisoning.  You can't play with the Devil's fire without getting burned.

"I feel that I'm here in Hollywood because of faith and God's will." —Miley Cyrus

The Cyrus family are kidding themselves to think that Miley won't go down the same perilous path as Britney Spears or Lindsay Lohan—she's already there!!! Miley Cyrus has chosen to dwell in the tents of the wicked.

As believers, we are in a battle today—a war against evil... "For we wrestle not against flesh and blood, but against principalities, against powers, against the rulers of the darkness of this world, against spiritual wickedness in high places" (Ephesians 6:12). Each believer must personally decide to live for God or live in rebellion against the Scriptures.

The world today is filled with religious apostates... "Having a form of godliness, but denying the power thereof..." (2nd Timothy 3:5). Contemporary Christian Music is as apostate as can be. There's nothing any more despicable, fake and unchristian today than so-called "Christian Rock." Ain't no such animal. All Rock music is of the Devil. Christian rockers are dwelling in the tent of the wicked. Satan loves professed Christians who sing, dress, talk and live like the unsaved heathen world.

No Christian should ever speak neutrally about the sins of homosexuality and abortion. Such sins are vile, immoral and disgusting. God hates sin as much as He loves the sinner; but all we hear the heathen world talk about is God's love. Let's talk about God's wrath, "...God is angry with the wicked every day" (Psalm 7:11).

No one has an excuse to be dishonest, greedy, immoral or mean. As individuals, we must all give account to God (Romans 14:12; 2nd Corinthians 5:10). May we all decide to be a doorkeeper in the house of God; than to dwell in the tents of wickedness.

"Better is a little with righteousness than great revenues without right." —Proverb 16:8