What Is Baptism?
Is baptism required for salvation? 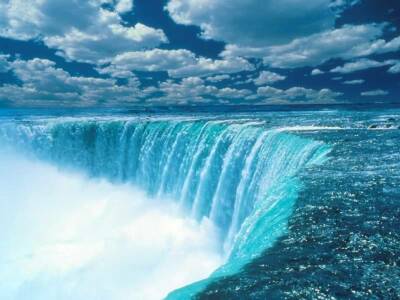 Isn't the water in the photo to the left beautiful? As lovely as it is, it's just water my friend... it cannot save you.

In the Old Testament period, baptism was a ritual of conversion to Judaism. Pagans would become proselytes through this ritual by self-baptizing themselves to become part of the Jewish people. So it was an Identification with the people of God.

"In the name of Jesus" distinguishes the Christian baptism from all others at that time. This is not referring to the formula said over a person, but indicated a confession in Christ which was made publicly. To be baptized in Jesus' name was the command to the hearers of the gospel.

Does this contradict Matthew 28:19 of being baptized in the Trinitarian formula (i.e., in the name of the Father, Son and Holy Ghost)? No, Jesus is the sole representative of the triune God in bodily form. The Godhead became incarnate in the flesh of the God-man, Christ Jesus (1st Timothy 3:16 - King James Bible). We are told there is no other name by which one is to be saved (Acts 4:10-12). He alone is the fullness of the Godhead (bodily) according to Colossians 2:9 (King James Bible).

His name was used to represent the Godhead to the hearers of the Gospel, distinguishing it from the other baptisms of their day. Church history and tradition shows the Trinitarian form, in the name of the Father, the Son and the Holy Spirit, was the method of baptism (Matthew 28). There are two major ordinances in the New Testament, baptism and the Lord's supper. In the Old Testament, the major ordinances were circumcision and the Passover. The Passover was changed to the Lord's supper and points back to the death of Christ and His future return. It is a memorial which we take until He comes, identifying with His death and second coming.

While the Old Testament circumcision was of the flesh, the New Testament circumcision is of the heart, an internal renewal by the Spirit, a cutting away of the sins of the flesh (Colossians 2:11,13 ; Philippians 3:3). Mistakes are made when one uses an ordinance which is a symbol and makes it an actual occurrence of grace. People misplace faith in the ordinances to get what they symbolize. Take, for example, the Catholic view of the Lord's supper as being able to impart grace; the same as with baptism.

In the third century, believers started to baptize their children before any confession of faith. They related this to the rite of circumcision, which was applied to sons at eight days old, so similarly, baptism was applied to children. Yet it is by faith and God's grace one is saved. No work of man or any kind of Biblical ritual can impart grace. Salvation is neither a creed, a doctrine, nor ordinance. It is found only in a person - Jesus Christ and His work on the cross, and that was done for us.

Almost every covenant had a sign or token along with it. For Noah, it was the rainbow; for Abraham, it was circumcision; for Moses, it was the Sabbath; and for the new covenant of grace, it is baptism by water. None of these were the covenant itself but a token of one's entry into a covenant with God. All were visible means for the participants in it. Baptism is to identify with a person, a group of people, or the message. As Christians this has been practiced as an ordinance. It is a symbol and witness of the change of ownership that has taken place for us.

We identify with the Lord Jesus, His message, and the body of believers. It is a symbol of my old life being dead (I was crucified and buried with Christ and raised up to newness of life). This new life takes place at the cross by His death and resurrection, not when I'm immersed in water. Those who heard John's and Jesus' message and believed, were obedient to be baptized in water as the visible sign of their repentance. It is a symbol, not the substance.

Some References of Baptism and Faith used in the New Testament Books:

This is by no means an exhaustive comparison, yet, this shows the overall usage of both baptism and faith. The Bible teaches that by God's grace; through faith the means, salvation is given. Over 240 times, faith (belief) is the only required condition for salvation. The book of John which teaches who Jesus is and how one can be saved mentions salvation by belief (faith) 95 times. The basic Biblical principle of interpretation (hermeneutics) is that we don't ever interpret the major portion of Scripture by the lesser.

A natural example: The branches of a tree never interpret the trunk. The trunk is what upholds the branches. It is the main strength that gives life to those that extend out from it. If we look at the book of Acts which shows the practices of early Christianity we find some very revealing facts...

This does not mean they disposed of the rite of baptism. What it does indicate is that salvation is found outside the practice of baptism. Nowhere does it say "to be baptized to be saved" by itself. However you will find faith separate from baptism for salvation. The greater context in scripture always teaches salvation occurs before baptism. No one followed Jesus to be saved, nor were they baptized to be saved. If they were pronounced saved by their faith before baptism then baptism is clearly not part of the gospel.

Christ offered himself as salvation to the people. Mary when found with the child said she rejoiced in "God my Saviour" (Luke 1:47). Simeon likewise in Luke 2:29-30 said as he held the baby Jesus, "Lord, now lettest thou thy servant depart in peace, according to thy word: For mine eyes have seen thy salvation." Salvation is never referred to as a "rite" or an "ordinance" nor a "state" (as the "Salvation Army calls it); salvation is a supernatural miracle of God in response to our faith in Jesus Christ. This is what makes Christianity different from religion, it is not by self-righteous works.

“A demonic spirit's favorite activity is making a person feel religious without an understanding of the Word of God.” —Pastor Max D. Younce