Have You Been Born Again?

“Jesus answered and said...Except a man be born again, he cannot see the kingdom of God.” —John 3:3 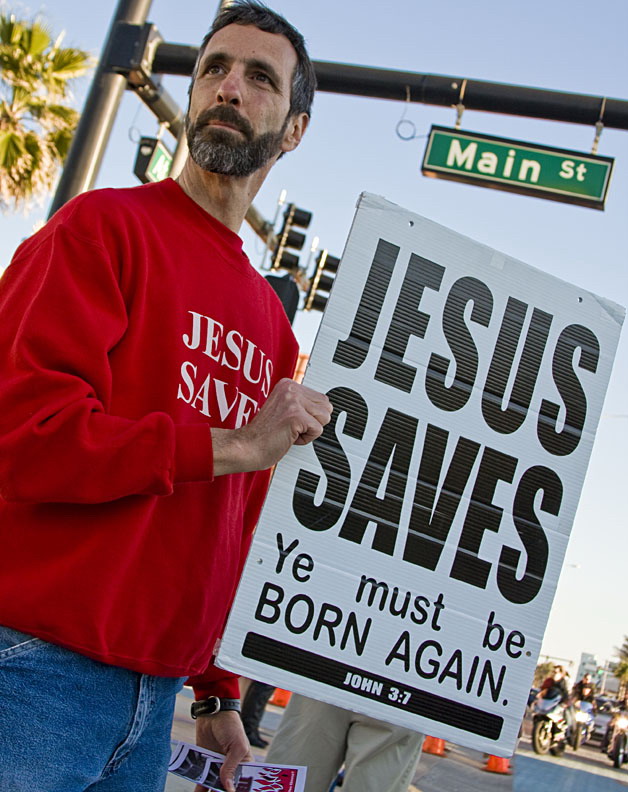 John 6:26, “Jesus answered them and said, Verily, verily, I say unto you, Ye seek me, not because ye saw the miracles, but because ye did eat of the loaves, and were filled.”

Many people today are following Jesus in religion and are on their way to Hell in unbelief. Martin Luther King Jr. spoke often about Jesus, but King openly denied Christ's deity, virgin birth and bodily resurrection.

Saying a Prayer is Not Salvation

We read in Acts 10:2 about a religious man named Cornelius, who feared God, gave alms to the poor and prayed always; yet Cornelius WASN'T saved. Cornelius is a perfect example of many people today who have churchianity without Christianity. Hundreds-of-millions of Roman Catholics around the world (with their immaculate and large buildings to worship in) do not know Jesus Christ as their personal Savior. They worship idols and Mary instead, dismissing their sinful idolatry as admiration. They are living a big lie and are deceived of themselves.

Cornelius genuinely loved God. He gave money to the needy. He prayed continually. Cornelius was a devout and caring religious man. But Cornelius was as lost as could be, still hellbound in his sins without Christ. God sent an angel to warn Cornelius, telling him to go find Peter to hear the gospel. In Acts 10:39-43 we find Peter preaching the gospel and many of them believed. Cornelius got saved and was born anew of the Spirit of God.

Saying a prayer, or a thousand prayers, won't save you from the wrath of God to come against sinners. Prayervation is not salvation. Certainly, a repentant sinner may express his or her heart's faith with a sinner's prayer; but that is not what I hear being taught in today's apostate churches. I hear people professing to be saved because they “prayed the Jesus prayer” or just “prayed a prayer.” That is not salvation. What they should be saying is that they called upon the name of the Lord Jesus Christ Who died, was buried and rose again for their sins, and that is what they are trusting to save them; not some prayer. I never hear anybody say that. They always say, “I prayed a prayer” or “I went to find a minister to lead me in a sinner's prayer.”

Making Jesus the Lord Of Your Life is Not Salvation

We read in Matthew 7:21-23 about a group of religious people who had died and are now standing at the judgment before God. The Lord says He never knew them. They attempt to defend themselves by arguing that they did many wonderful works, preached in Jesus' name and even cast out devils during their lifetime; but the Lord said, depart from me, ye cursed, for I never knew you. Wow! Every person should take heed to this passage of Scripture and make sure that you are truly saved. This is your Lordship Salvation crowd. This is Ray Comfort, Paul Washer, Kirk Cameron and John MacArthur. These are unsaved heretics who perverted the free gift of salvation into a reward that can only be merited through amending one's ways, leaving sinful behavior behind and totally surrendering to do Christ's will.

Matthew 7:21-23, “Not every one that saith unto me, Lord, Lord, shall enter into the kingdom of heaven; but he that doeth the will of my Father which is in heaven. Many will say to me in that day, Lord, Lord, have we not prophesied in thy name? and in thy name have cast out devils? and in thy name done many wonderful works? And then will I profess unto them, I never knew you: depart from me, ye that work iniquity.”

Those fools who teach Lordship Salvation go around telling people to make Jesus Lord of your life or you cannot be saved. This is exactly what WhoJesusIs.com also teaches. It is a corrupt gospel of damnation, no good news at all. It is a curse in our churches today. Lest you think it only a trifle matter of semantics, consider carefully that all of the following false religions agree with John MacArthur and Ray Comfort's perverted junk theology...

As you have just learned if you researched these links provided, Ray Comfort and John MacArthur teach the same false gospel as the cults. Biblical salvation is so simple and free, where the burden rests entirely upon Christ and not upon the sinner. In the perverted view of Lordship Salvationists (Calvinists), a heavy burden to clean up one's sinful ways, make amends and cease from sinful bad habits is absolutely mandatory to be saved. What a massive heavy burden!

The big question for those who teach Lordship Salvation is... how much sin must be stopped to be saved? The Biblical response is that no man can stop sinning. As my pastor used to say, we can walk in the Spirit at any given time and not sin if we choose to; but we won't always choose to do right because we are in the flesh and inherently sinful by nature. Getting saved DOESN'T change the old carnal nature; but rather, the believer now has a new nature, and that new nature is the Spirit of Jesus Christ (Romans 8:9). This is why every Christian believer has a constant struggle going on between the two natures, that is, between the flesh and the spirit (Romans 7:14-25).

"That if you confess with your mouth, "Jesus is Lord," and believe in your heart that God raised him from the dead, you will be saved."

The Bible never requires us to make Jesus our "Lord" to be saved, only trust Him as our Savior (John 14:6). Peter shows clear evidence of this when he professed, "Thou art the Christ, the Son of the living God" in Matthew 16:16. Peter never confessed "Jesus is Lord."  Rather, Peter received Jesus as the Messiah. Genesis 15:6 simply states that Abraham, "...believed in the LORD; and he (God) counted it to him for righteousness." Romans 4:5 plainly states, "But to him that worketh not, but believeth on him that justifieth the ungodly, his faith is counted for righteousness."

It is our faith upon Jesus as our Savior, because of the blood that He shed for our sins, that saves us (1st Peter 1:18,19). Making Christ the Lord of our life is a matter of Christian obedience; NOT Salvation. If one had to make Jesus the Lord of their life to be saved, then Lot, Samson, and Solomon would all be in Hell today. What about Ananias and Sapphira? What about the carnal Believers at Corinth? What about 1st Corinthians 3:15?

Hypocritically, Lordship Salvationists will quote Scriptures about being saved by faith alone; but then require people to have some outward self-righteousness to validate their faith. Clearly they are confusing the ROOT of a believer's faith, which Paul speaks of in Romans; in contrast to the FRUIT of a believer's faith, which is spoken of by James. For more information please read, "Are We Justified by Faith and Works?"

The NIV is from Hell, which is exactly where the Lordship Salvation gang is headed. Yes, this means John MacArthur is going to Hell. Don't be deceived my friend, if you believe that you have to do as little as give a cup of water to someone to be saved, you will burn in Hell for all eternity. The blood of Christ is what takes our sins away (not just the death of Christ), and ANY self-righteous efforts on our part is a total rejection of Christ's work of redemption.

Believing the Gospel is the Way to Be Saved

Notice that the WhoJesusIs.com website fails to teach that JESUS IS GOD! They fail to teach the GODHEAD! Mormons, Jehovah's Witnesses (JW) and Seventh Day Adventists (SDA) believe that Jesus is the Son of God, but they strongly deny that He is God almighty. Beware of SDA's who falsely claim to believe in Christ's deity, but they think Michael became Jesus (as do the JW's).

Do you believe (personally trust) that Jesus died, was buried and rose again to pay for your sins? If you do, then you are saved. Christ died, that's history; Christ died for me, that's salvation. You don't need to pray a prayer. You don't need to do anything except believe and the work is done. John 6:29, “Jesus answered and said unto them, This is the work of God, that ye believe on him whom he hath sent.”

Will you receive Jesus as your personal Savior, believing on His name to have your sins forgiven? John 1:12-13, “But as many as received him, to them gave he power to become the sons of God, even to them that believe on his name: Which were born, not of blood, nor of the will of the flesh, nor of the will of man, but of God.”

Jesus paid for our sins with His literal, physical, blood. 1st Peter 1:18-19, “Forasmuch as ye know that ye were not redeemed with corruptible things, as silver and gold, from your vain conversation received by tradition from your fathers; But with the precious blood of Christ, as of a lamb without blemish and without spot.”

Salvation is instant and immediate. Being born-again by the Spirit of God is a new birth, a second birth, a spiritual birth. Salvation is NOT a prayer. It is not turning over a new leaf. It is not joining a religious denomination or church. Salvation is a supernatural miracle of God in response to one's faith in the Son of God. John 20:31, “But these are written, that ye might believe that Jesus is the Christ, the Son of God; and that believing ye might have life through his name.”

Salvation is a new birth, being born anew (born-again) by the Spirit of God. Many people adopt some religious teachings and mistakenly think they have salvation, but they do not. Salvation is NOT a process; it is immediate and instantaneous in response to a person's trust upon the Lord. Mental consent to the historical facts is knowledge, not salvation; but when a person personally believes on the Lord's death, burial and resurrection as payment for THEIR SINS, then they are saved.

God performs the miracle of salvation. So many people foolishly think that Christianity means to ascribe to the teachings of Christianity. That is religion! If you've been born-again, then you have God's Holy Spirit living (indwelling) within you (Romans 8:9).

"But to him that worketh not, but believeth on him that justifieth the ungodly, his faith is counted for righteousness." —Romans 4:5

If you'd like to learn all about salvation, then please read the book Salvation is More than Being Saved.

Also, you may want to read Ye Must Be Born Again and God's Simple Plan.

Helpful articles from my book, Salvation: