A Christian Family...
Terrorized and destroyed by the Government!

“The evils of tyranny are rarely seen but by him who resists it.”
—John Hay, 1872

(a 4TH branch of unconstitutional fascist-style government and how it is being used to steal your children!)

Is Your Family Next?

This page is designed to inform the public of tactics used by Police, Children's Services, and the courts to steal your children.  As grandma always used to say, an ounce of prevention is worth more than a pound of cure!  Believe us, she was right!  Had we known then what we know now, our daughters would be happily playing with us right now.  So here is the information, paid for in blood and tears, that can protect you and your children from the organization that supposedly serves and protects them. 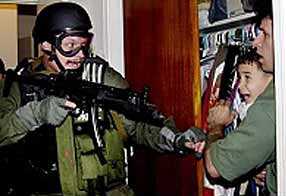 What Can We Do?

It is important to know the motive behind the Children's Services organizations.  The number one motive is MONEY.  Federal dollars are awarded to each state based on certain statistics like how many children are taken into care, how many are adopted out, what kind of services a child needs etc.  These services are "needs" created by the state to justify the well paid therapists, psychologists, doctors, counselors, lawyers etc.  who all benefit from this industry.  This makes JOB SECURITY the second motive behind Children's Services.

We do not believe that people would actually enjoy ripping families apart and placing children into conditions sometimes far worse than they were taken from (often only to die or be raped or abused in foster homes).  We believe that people take the philosophy of "this is just my job" and "the state has the best interest of the child in mind".  Our government has helped to create a nation full of mindless zombies who go about "doing their jobs" in direct conflict with their own conscience.  If anyone raises an eyebrow they are quickly relieved of their position, sometimes of their life.

For now, Children's Services concentrates mostly on the weak, the poor and the vulnerable, people known to be easily subdued or swept under the carpet.  But statistically they are running out of children, so they are working on ways to infiltrate all sectors of society.

Look at your local newsletters and bulletins.  Do you see flyers and leaflets that beckon you to come and contribute to help prevent child abuse?  Do they speak of how many children are abused and never receive help because it goes unreported?  The only reason they want people to come to them is so they can scope out every family in every community.

Don't believe it?  This year, 2000, Governor Kitzhaber decried his plan to screen every firstborn of all families in the state of Oregon.  He wants to "ensure" no abuse goes undetected.  If you are familiar with King Herod or Pharaoh of old, then this "Firstborn" talk should raise the hairs on your neck!  History repeats itself my friend, WAKE UP!!!

Children's Services are known to be abusing power in most every state.  Do we, the public really want them poking their noses or other extremities into our living room, our bedroom?  Things like breast-feeding or allowing your child to climb into bed with you when they are scared are now classified as child abuse in some states.  You could have your door broken down, your house infiltrated by armed men in black riot gear screaming at you "where are your children"?  When they've got you on the floor in cuffs and their foot on your neck, they send in the others to drag your kids out kicking and screaming, and if you are lucky they just leave you there crying and bleeding on your carpet.  But usually they arrest the parent(s) on some trumped up charge or allegation, and \$50,000 later they still don't have their children back.

If this sounds like a nightmare, you are right, it is.  We've personally faced men armed with submachine guns at dawn on private property.  They were looking for our newborn whom God gave us the sense to hide beforehand in a place far away from us.  You see, Children's Services' mandate is to help bring families safely back together, but they put them in harm's way from the very beginning.  Why do they need guns?  Because they are thieves!  Why do they wear black?  Because they are hiding in cowardice!

These people have sold their freedom, even their very soul for a government paycheck and the power trip they get from abusing the poor, the widow, the needy, the hungry, the oppressed and the rejected.  I tell you the truth, when they stand before God to be judged, it would have been better for them had they never been born at all.  Our hope and prayer is that they repent of their wicked ways before it is too late.  Pity on the people who have taken our three daughters because they have to answer to God for it.

Now that you have a little background as to why the state is looking to take your children, you can better understand how to protect them.  There really is no formula to follow except one.  It may sound crazy, but here it is: "Obedience to God".  If you have a relationship with Him and know how to hear His voice (John 10:4 & John 10:27) then you will be able to do the right thing when it is asked of you.  God gave you your children.  The state did not, nor can it.

God says that He "knew you before he knit you together in your mother's womb" (Jeremiah 1:5).  He also says that He has good plans for you (Jeremiah 29:11).  So this means that He knew what He was doing.  Your being the parents of your children is no mistake...

Perhaps you've made mistakes in raising them just as every other parent on earth has, but God intended your children to be with you.  You must believe this and you must operate in your duty to protect them.  It is important to also remember that the children God has entrusted us with are a gift.  They are not actually ours, but God's on loan.  So in protecting them, you are really protecting God's property, His beloved property.

"How do I protect them" you ask?  Physically, Spiritually, Mentally and by all other means possible.  "How do I protect them from men with machine guns?" Good question.  Offer yourself as a sacrifice just as Jesus did.  Know that protecting Truth, Justice, Honor, The Poor, The Needy, The Widow, The Helpless, The Fatherless, The Downtrodden and The Children is worth laying down your life for.

Love God more than your own life and you will possess a power far greater than any this earth has ever known.  "Greater love has no-one than this, that he lay down his life for his friends" (John 15:13).  Your children should be your friends.  Treat them that way!  Hold their hand and go for walks with them.  Feed the ducks, go pick flowers, watch a movie together, do lunch!  Have fun with them, this is God's intent.  We miss our daughters so much.  I miss the rainbow hunts with Bethany.  I've seen so many since she's been gone.  Some have lasted for hours.  We miss Lydia's "Crystal Rock" hunts.  We miss Miriam's funny little phrases.  Oh God, bring them home soon, please we beg you Father...


Learn from our mistake, we believed the lies of Police Officers, that we had no choice but to allow them into our home to interrogate our precious daughters.  We did have a choice.  We should have shut our door and let them force entry if they wanted to.  We should have protected our daughters by whatever means possible even after a forced entry.  Thank God we had protected them mentally and spiritually before hand, but we failed to protect them physically because we let the Police and Children's Services make us feel guilty.  We believed that what they were saying was right, our children needed to be protected from us!  Now we know, God made no mistake.  We may not have been the perfect parents, but we did know God and taught our daughters to Trust in Him, something the state cannot, nor ever will do for them.  What more does a person need than faith?  Nothing!

This is our advice to you parents out there.  Be aware that at any time, law enforcement and related workers can break into your home to seize your children based on rumors or allegations from a teacher, a neighbor or even an anonymous tipster.  This means you need to be rehearsed in your mind and to have a plan ahead of time.  Don't wait for it to happen, chances are it will be too late then.

Put some kind of alarm on your home's entrances that will awake and alert you and your children to intruders.  Anyone who breaks into your house is a thief whether they work for the government or not.  (Be forewarned, that the courts will not recognize this, they back up Police and Children's Services 100% so you will see no mercy if it ever goes into the courts).  Regardless, your children deserve proper protection from abuse by the state and it is your duty to resist any potential abductor.  How are you to know who these burglars are anyway?  They come like a thief in the night.

There are cases all over the United States of people dressing as Police Officers or Sheriffs to subdue women and rape them on highways and back alley-ways.  Many even have cars marked the same as genuine law enforcement vehicles.  In many towns, actual Police Officers commit heinous crimes themselves, their uniform and badge doesn't make them clean.  Only integrity can do that, but the scrupulous Police Officer is hard to find these days.

We've had people sent to us to tell us that we should obey the government because God put them in authority above us and they are in place to do good, not harm.  Do they really expect me to believe this when our character has been smeared in the paper numerous times, justice denied in the courts numerous times and our daughters abused by the state while in state care?

The authorities are there because they raped the beggar, the widow and the poor and used them as a highway to roll into power.  God is not a politician, God's government is JUST and TRUE!  Don't read us scriptures of "obey your authorities" and equate that to "obey the state".  Our Authority is God alone, for He is the only True Author in existence.  Can the state make a baby?  Certainly not!  Then neither is it any person's Author, nor can it be any person's Authority.  Respect will be given no man, but to God who created man.  That is our position unshaken.

John and Jane Gilman have put together the following two charts designed to show you how and why you are at risk and what you can do to protect yourself, your loved ones, and improve your community:

"And ye now therefore have sorrow: but I will see you again, and your heart shall rejoice, and your joy no man taketh from you." —John 16:22 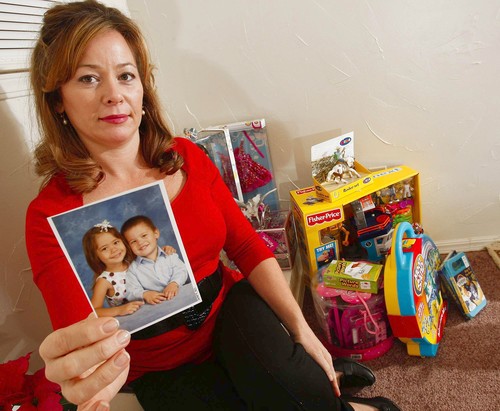 Read the story of this unfortunate grieving mother who lost her two children in 2009 for merely giving them each three swats on an airplane for misbehaving. She has been convicted of a felony under the unconstitutional Patriot Acts. Her children have been given away by adoption!

Hell will be hot enough for those evil people who break apart families!

An Update on the Christines